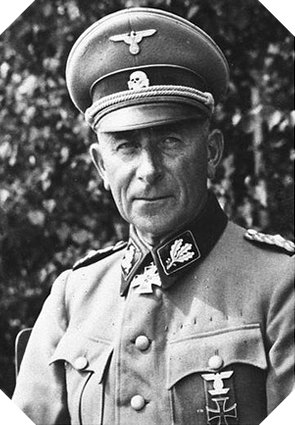 Paul Hausser was born on October 7, 1880 in Brandenburg an der Havel. Coming from a Prussian military family, he joined the army to become an officer. In 1899 he graduated from the Berlin-Lichterfelde Military Academy. The same year, he joined as a lieutenant the 155th Infantry Regiment. He served in staff during the First World War and in the Reichswehr until his retirement on January 31, 1932.

He then joined the association of German veterans Stahlhelm which he became the regional delegate of the Brandenburg-Berlin Länder in 1933. He was approached by the SA and then by the SS who make a valuable ally: instructor and inspector of the school of SS Junkerschule officers in Brunswick, he then participated in the invasion of Poland in 1939 as an observer in a joint Wehrmacht and SS unit. This became the 2nd SS division “Das Reich” which he led during the campaign France in 1940 then on the Russian front at the beginning of Operation Barbarossa where he lost an eye during the fighting.

Paul Hausser participates in the Battle of Kursk at the head of the 2nd SS Panzerkorps (composed of armored divisions “Leibstandarte-Adolf Hitler“, “Das Reich” and “Totenkopf“) which is also sent to Italy and finally to France in order to counter to attack the Allied forces having landed in Normandy. Hausser took command of the 7th Army on June 28, 1944 after the death (under dubious conditions) of Friedrich Dollmann.

Incapable, like his predecessor, to break allied lines especially because of complete control of the tunes of their opponents, Hausser is trapped in the Falaise pocket that forms after the failed attempt to cut the American lines to Avranches (operation Lüttich). Hit in the jaw during the fighting, he was evacuated from the front and put at the head of the Army Group G from January 28 to April 3, 1945.

At the end of the Second World War, Paul Hausser served at the Kesselring staff before being taken prisoner. He participated in the Nuremberg trial during which he defends the military role of the Waffen-S.S. during the war.

Subsequently, he wrote a number of books, especially “Waffen-SS im Einsatz” (The Waffen-SS in Action), published in 1953. Hausser deals until the end of his life with the Veterans Association of the Waffen-SS : H.I.A.G. He died on 21 December 1972 in Ludwigsburg at the age of 92.