Baron-sur-Odon in 1944 – Calvados – Battle of Normandy

On June 26, 1944, the British launched Operation Epsom, which aimed to pierce the front to the southwest of Caen and to seize the crossing points on the Odon. The following day the Odon was crossed and the bridgehead installed along the south shore had to be secured: for this purpose, the tanks of the 23rd Hussars (29th Armored Brigade, 11th Armored Division) reached the village of Baron-sur- Odo on 28 June. To the east of this commune, an important movement of land around the point 112 is at the center of all the attentions with the two camps. The 4th Battalion ((159th Infantry Brigade) captured it while the 43rd Infantry Division took positions in Baron-sur-Odon on June 29th.

On 30 June, the Germans counterattacked with infantry, artillery and armored vehicles to take back hill 112 and pushed back the 4th Battalion The King’s Shropshire Light Infantry to Baron-sur-Odon. The British were ordered to adopt a hermetic defensive device and to hold despite the power of opposing counter-attacks.

On 1 July, the village fell again into German hands after an attack by the 10. SS-Panzerdivision, but it was definitively under British control around noon after the counter-offensive of the 31st Royal Tank Regiment.

Brigadier John Ronald Mackintosh-Walker, chief of the 227th (Highland) Infantry Brigade of the 43rd Infantry Division, was killed in the early hours of July 16, 1944, when Operation Greenline, As well as several other officers by the explosion of a German shell in his command post. It was not until the 4th of August and the enemy’s withdrawal to the south-east that the village of Baron-sur-Odon was definitely out of danger. 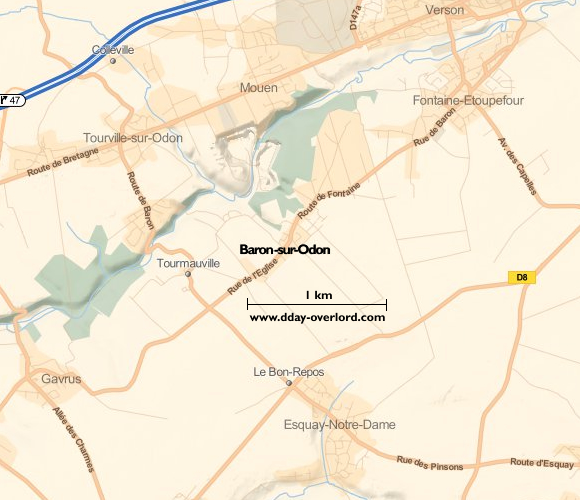