Bénouville in 1944 – Calvados – Battle of Normandy

The British and Canadian Airborne Forces belonging to the 6th Airborne Division were responsible for capturing the western and eastern shores of the Orne on the night of June 5-6, 1944, which were held by the 716 Infantry Division. This operation is known as Tonga. One of the particular objectives of Tonga is to take two bridges: one on the Orne River in the east, located in the commune of Ranville (baptized Horsa Bridge) and the other on the Canal de Caen, West (Pegasus Bridge). These two bridges must allow to secure the left flank of the allied forces on D-Day and during the weeks following the landing. As they must be taken intact and in the first seconds of the airborne engagement, the selected vector is the glider: this means is discreet and relatively accurate.

This operation, known as Operation Deadstick (also known as the “Coup de main party”), was entrusted to the D Air Company’s 2nd Battalion Oxfordshire & Buckinghamshire Light Infantry – 2nd Ox & Bucks – 6th Airlanding Brigade Commanded by Major John Howard. On the night of 4 to 5 June 1944, 24 hours before the general assault, nine parachutists were dropped near the landing zones “X” and “Y”. They are instructed to contact the local resistance of which one of the members holds a cafe (called “La Chaumine”) in Bénouville, Louis Picot.

The following night, divided into three gliders (three more are required for the Ranville bridge), the British company D landed at exactly 12:25 on June 6, 1944 exactly at the intended location (landing zone coded “X” And located 50 meters from the Euston I bridge). The bridge of Bénouville is taken in 10 minutes. The airborne soldiers secure the surrounding area despite the loss of Lieutenant Brotheridge, the 1st section chief, the first British officer to die on D-Day. During the fighting, some inhabitants venture outside their home: this is the case of Louis Picot, who is mortally hit by a German shot. The English rushed to his house, located in the immediate vicinity of the bridge, before leaving: it was the first liberated house in France, a few hours before the Gondrée cafe which would open its doors only at dawn Transformed into an advanced medical antenna.

Meanwhile, the 7th Battalion Parachute Regiment (5th Para Battalion), commanded by Lieutenant-Colonel George Pine-Coffin, was dropped over drop zone coded “N” north-east of Ranville. After gathering at the regimental rallying point, they made their way to Bénouville and Le Port to secure the west bank of the Canal de Caen. Major Roger Neale’s company B is banned northwest of Le Port, Major Nigel Taylor’s company A prohibits the western outskirts of Bénouville while Major R. Bartlett’s company C prohibits the south Along the Canal de Caen.

The third battalion of the Grenadier-Regiment 736 and the 1st Company of the Pioneer-Battalion 716 of the 716. Infanterie-Division made an initial reconnaissance of the western banks of the Canal de Caen, progressing towards the Port and Bénouville: a self-propelled cannon In the direction of the bridge before being destroyed by a PIAT rocket launch.Attened by the reports of the 716. Infantry-Division soldiers who are unable to control the situation, the 21. Panzer-Division orders around 02:30 To several mechanized patrols to recognize the western and eastern shores of the Orne. The leading elements of the 8th mechanized company of the Panzergrenadier-Regiment 192, led by Oberleutnant Braatz, advance west of the Caen Canal and establish contact with the 6th Airborne Division. At 3 am, they are pushed back by paratroopers of the 7th Battalion Parachute Regiment who seized the whole of Bénouville and the skirmishes continue throughout the morning of D-Day.

At 13:32 pm, Lord Lovat and his 1st Special Service Brigade landed at Sword Beach in the morning joins the 7th Para Regiment and the Major Howard Company, while German snipers and mortars continue to kill in the area of Bénouville. Howard ordered his men to cut several trees along the eastern shore of the Orne Channel, considering that they served as landmarks for the opposing artillerymen, but the shots were gradually stopped. At 18:00, the 2nd Battalion Royal Warwickshire Regiment (185th Infantry Brigade) commanded by Lieutenant-Colonel H. O. S. Herdon reinforced the position of the 7th Para Regiment in the Bénouville sector.

Today, the bodies of 23 British soldiers rest in the communal cemetery of Bénouville. Most of them belong to the 7th Para Regiment and were buried there during the fighting. 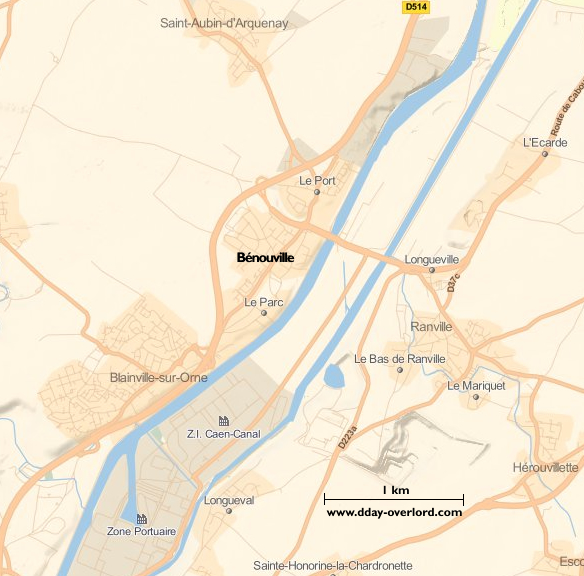