The commune of Ver-sur-Mer in Calvados is located along Gold Beach, a beach area dedicated to the landing of the 50th British infantry division.

This locality is held by elements of the 716. Infantry-Division. After the landing on Gold, the 7th Battalion Green Howards Regiment belonging to the 69th Infantry Brigade of the 50th Infantry Division approached Ver-sur-Mer by the departmental road 112 in the late morning, supported by the tanks of the 4th/7th Dragoons Guard. Company D of the 7th Green Howards is leading and delivering short but intense fights. It suffers great losses and makes about forty prisoners in the opposing ranks. The 6th Green Howards seized the Mare Fontaine battery, coded Wn 32 by the Germans, with 4 horse-drawn 100 mm FH 14/19 guns of Czech origin. The site, armed by the 6th battery of the Artillery-Regiment 1716, is defended by Russian elements belonging to the 4th company of the Ost-Battalion 441.

Company B, supported by the tanks, relaunches the action and manages to repel the enemy beyond the southern part of Ver-sur-Mer. Although the locality is in the hands of the English, the latter do not slow down and continue along the departmental road 65 in the direction of Creully.

The town of Ver-sur-Mer was chosen to host the main British monument of the Normandy landings, which first stone is laid, in the presence of veterans, on June 6, 2019 by the English Prime Minister and French President Emmanuel Macron. 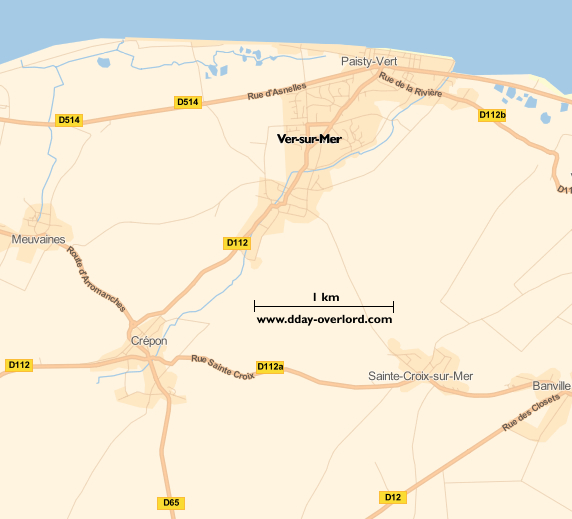