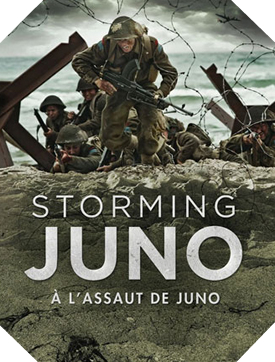 The film Storming Juno by Tim Wolochatiuk is a Canadian documentary that tells the story of the soldiers who landed on Juno Beach and dropped over Normandy as part of the Operation Overlord, June 6, 1944.

The film highlights the role of the Canadian army, too often forgotten, in this extraordinary military operation which is a turning point of the Second World War. Storming Juno reminds spectators of the sacrifice of a nation committed alongside the Allies and Canada’s essential involvement in the military effort at the Battle of Normandy.

Storming Juno is inspired by the narratives of Canadian veterans and features three characters: Corporal Dan Hartigan, dropped over Normandy on the night of June 5-6, 1944, Lieutenant Bill Grayson regiment Regina Rifles disembarking with his men on the beach, and Sergeant Leo Gariepy, tank commander also landed on Juno. This staging of real stories allows to identify with the characters and to live through their experience this major event of the Second World War from the crossing of the English Channel until the beginnings of the battle of Normandy.

The testimonies of the veterans have been collected and available in the DVD version.

This film was broadcast for the first time on History Channel in the United States in November 2010.

Back to the D-Day Filmography menu