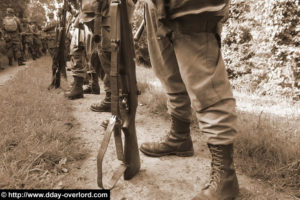 This page presents you the calendar of the various reenactments of military camps in 2019 on the occasion of the 75th anniversary of the landing and the battle of Normandy.
You want to add an event to this calendar: click here.

Bloody Gulch Reconstruction Camp – Donville Manor, 50500 Méautis
09:00 am to 06:00 pm: reconstitution of a military camp with American, German and civil vehicles. Reconstituants in period clothes, grocery store of 1944 with refreshment room and possibility of lunch on the spot. Numerous demonstrations of fights with possibility of baptisms of vintage vehicles (with fee).

Merville Battery
Two military camps are reconstituted at this time on the site of the battery Merville: a German camp and a British camp.

Dog Green Camps – 14710 Vierville-sur-Mer
On the occasion of the 75th anniversary of the Allied landings, the UNIVEM association organizes an American military camp of the Second World War. Animations and commemorations are planned: exhibition of heavy vehicles, convoys, baptisms in Jeep, GMC, half-track and Sherman tank. Information : Dday2019.Univem@gmail.com.

Old Abe Camp – Voie de la liberté (“Purple Heart Lane“), 50500 Carentan
Currahee Commemo Airborne Group offers visitors an immersive atmosphere in the American paratroopers fighting, recreating trenches, foxholes and mortar positions, and presenting the original material, the soldier’s daily life on the front and the history of the places, battlefield of the 101st Airborne Division.
The camp is open to the public from 10am without interruption. Free entry. Information: +33 (0)6.33.21.04.18.

“Remember Omaha” camp – Route de Grandcamp, 14710 Vierville-sur-Mer
Reconstitution of a US and German military camp with the participation of many vehicles, at the D-Day Omaha Museum.
Prices museum & village: adult 7 €, -15 years 5 €, free -8 years.

Utah Beach Memory Field – Utah Beach, 50480 Sainte-Marie-du-Mont
Historical gathering presenting in a playful and immersive way the army of yesterday and today. The various exhibitions on offer allow you to take a look at the events that took place in Utah Beach on June 6, 1944 and the days that followed. Information: Utah Beach Landing Museum, +33 (0)2 33 71 53 35.

American camp – 14710 Colleville-sur-Mer
Reconstitution of an American military camp near the Big Red One Museum.

Arromanches-les-Bains
Reconstruction of a military camp of the 1st Polish Armored Division, near the orientation table. Information: collections@musee-arromanches.fr.

Creully Camp 2019 – Château de Creully, 14480 Creully
Come back to the daily life of the soldiers and civilians who fought during the Second World War over the British sector of Creully and more precisely to the Creully Castle, which was a particularly important place in the Battle of Normandy.

Overlord Museum, 14710 Colleville-sur-Mer
From 09:30 to 19:00, scenes recreated by groups of reenactments representing the various allied belligerents, on the site of the museum.

Sound and Light Show – Merville Battery
Historical reenactment with sound and light at the Merville-Franceville battery site, starting at 10:00 pm.
Costumes, military vehicles and projection immerse the public in the heart of the history of this German battery.
Online booking on Weezevent. For further information: sonetlumieremfp@gmail.com / +33 (0)2 31 91 47 53.

Normandy Airfield Camp – Airfield, 50430 Lessay
Military reenactment dedicated to the air forces of the Second World War on nearly 6000 m² of camp, more than 150 paras C47, 50 aircraft of exception gathered on the historic aerodrome of Lessay, called ALG A-20.

Back to the 2019 D-Day commemorations menu