Writing of articles on the French resistance and the American airborne assault during Operation Overlord in Normandy, published in March and May 2019 in the Spanish magazine “Desperta Ferro”, specializing in military history.

Publication of the book “D-Day Hour by Hour” published by OREP editions. This book written by Marc Laurenceau presents in an original way the unfolding and the stakes of Operation Overlord through 357 chronological events, completed by detailed descriptions of historical sites and equipment of the Normandy landings. Click here to learn more. 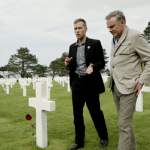 Participation of Marc Laurenceau, webmaster of the D-Day Overlord website, as historical advisor to the benefit of the historical film “Sacrifice” directed by Isabelle Clarke and Daniel Costelle and broadcast on June 5, 2014 on French TV channel “TF1”.

Participation of the D-Day Overlord website as historical advisor for the benefit of the book “The Battle of Normandy seen from the sky” designed and directed by Francis Cormon.

Publication of the special issue “The Second World War in Normandy”, 120 pages of the magazine Patrimoine Normand.

Participation in the realization of the book of Isabelle Bournier “June 6, 1944: The Landing”.

Participation in the realization of the French book of Hervé Tardy “Sentimental inventory of the French coasts: aerial walk of a photographer along the seashores”. One of the veterans’ testimonies on this site has been published.

Participation in the realization of the Brigade Piron magazine N°3, with the reproduction of the pages of this website dedicated to Operation Paddle. The five-page article is entitled “The Liberation of the Côte Fleurie from 17 to 29 August 1944”.

Installation of a commemorative plaque in honor of Private Jack Swinney, Easy Company, 506th PIR, 101st Airborne at the Historic Center of Carentan, killed on June 6, 1944 in Normandy.

Participation in the production of the newsletter of the CIDAN Association (Civisime Défense Armée Nation): Citizenship and Defense, French Ministry of Defense.

Radio broadcast on French radio “France Bleu”, live on June 5th 2004 near the church of Sainte-Mère-Eglise as part of the D-Day 60th anniversary.

A pedagogical DVD produced by the CNDP of Orléans-Tours (French Ministry of Education), entitled “Marc Laurenceau: a high school student tells the story of D-Day.”

Participation in the creation of the French book “Paroles du Jour J” by Jean-Pierre Guéno, author of the famous “Paroles de Poilus” book.