Prsentation of Marc Laurenceau – Author of the D-Day Overlord website

The author of the D-Day Overlord website: Marc Laurenceau 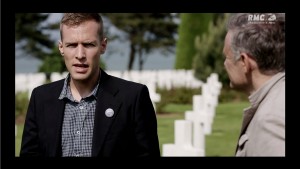 My name is Marc Laurenceau. Since my earliest age, I have traveled to places full of history, such as the beaches and the bocage of Normandy.

I have visited and constantly visit the historic area of ​​Normandy, where I meet veterans who have taught me an essential value: transmitting the flame of remembrance. This is why I had the idea, starting in 2003, to create a website to share what I learned on the ground and in books and especially to pay tribute to the veterans of D-Day: in July 2003, the first version of the D-Day Overlord website is available.

The publication of this site gave me the opportunity to participate in the realization of many projects related to the Battle of Normandy. In December 2003, the National Center for Educational Documentation (CNDP) of the French Ministry of Education, contacted me to produce a teaching DVD on the Normandy landing, and in June 2004, the DVD “Marc Laurenceau presented the Day J “is on sale in the CNDP network.

Similarly, in May 2004, I took part in the creation of the book “Paroles du Jour J” by Jean-Pierre Guéno, editor of Radio France, who has already published the famous “Paroles de Poilus”. This book is composed of letters written by the soldiers during Operation Overlord and the Battle of Normandy.

In February 2005, a second version of the site was published in order to meet the many expectations of Internet users: a new design is put online (realized in collaboration with Axel Ronsin), more than 1,800 historical and explanatory pages, unpublished sections, Veteran testimonials and more dense and corrected information. That same year, in July, the D-Day Overlord forum was born: it ranks fastest in its category and since its opening, more than 100,000 messages have been exchanged by enthusiasts This historical period.

Committed to preserving the historic area of ​​the Normandy landing, I decided to create the association “DDay-Overlord: Memory of the Battle of Normandy” (association law 1901) that perpetuates the memory of these historical events. It participates in the commemorations since the 70th anniversary of the landing.

In February 2016, this website is undergoing a major update and adopting a new design, allowing the integration of various contents.

I was invited to several radio shows (France Bleu, Europe 1) on June 5, 2004 in Sainte-Mère-Eglise and on June 6, 2009 in Ranville to present the genesis of my site. In 2014, I wrote seven articles in the special 70th anniversary issue of Patrimoine-Normand magazine. In 2015, I participated as a specialist in D-Day at the French TV show “Grains de sable de l’histoire”, presented by Eric Brunet, broadcasted on French channel RMC Découverte in June 2016.

Today, D-Day Overlord.com has become the benchmark in the field and represents the most visited French-speaking sites dedicated to the Battle of Normandy, with more than 110,000 new net surfers connected each month.