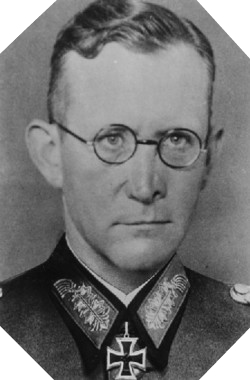 Erich Marcks was born on June 6, 1891 in Berlin. He is the son of the historian Erich Marcks. In 1909 he studied philosophy in Freiburg. But after only three semesters, he began his career in the army in October 1910. Twenty years later, in the early 1930s, he became the communications officer of the Ministry of the Armed Forces before working directly for Chancellors Franz von Papen and Kurt von Schleicher.

During the campaign of France in 1940, he worked on the staff of the 18th Army (it was during this period that Erich Marcks opposed the bombing of the city of Bruges and the destruction of the bridges of Paris, believing that even in time of war the historical monuments must be preserved) and then work on the invasion plans of the Soviet Union.

During Operation Barbarossa, he commanded the 101st Light Division and was severely injured in Ukraine on June 26, 1941, which cost him the amputation of one of his legs. In addition, two of his three sons are killed on the Russian front.

Before taking command of the 84th Army Corps in Normandy in 1944, he successively headed the 337th Infantry Division in Paris, the 66th Corps at Clermont-Ferrand and the 87th Corps at north of Brittany. Unlike most general officers, Erich Marcks believes in the possibility of landing in Normandy.

On June 6, 1944 he celebrated his fifty-third birthday, a date which also turns out to be D-Day for the Allied offensive in Normandy. After the start of the Overlord operation, he was one of the first German general officers to react without delay by launching a counter-attack on D-Day, but that breaks with the Americans.

During an inspection on the front June 12, 1944, an Allied air attack forced him to abandon his car near Hebecrevon (northwest of Saint-Lo). Nevertheless, he is seriously injured in the groin by a 20-mm shell that cuts off the femoral artery: transported by his driver in a ditch, he empties his blood and dies at 9:45.