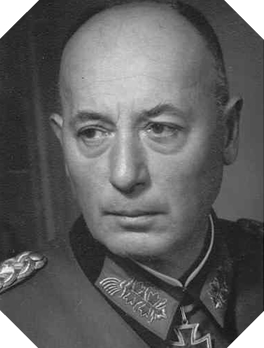 Friedrich Dollmann was born on February 2, 1882 in Würzburg. He participated in the First World War in an artillery division and then remained in the Reichswehr after 1918.

When the Second World War broke out, Dollmann was promoted to the rank of general and he commanded the 7th Army, which took part in the six weeks of Blitzkrieg, the famous lightning war against France. After this German victory on the western front, he remains on French territory and take charge of multiple occupation tasks.

Friedrich Dollmann receives the mission to defend the northwestern coast of France, Normandy and Brittany, for a possible allied amphibious assault. Knowing the favorable conditions concerning the tide and the schedules of daybreak, he expects a landing in June 1944 but with the bad weather at the beginning of this month, he does not put his army on alert.

While traveling to Rennes on June 5, 1944 to participate in a “Kriegspiel” (war game) with the theme of an Allied landing in Normandy, the Allies are attacking for real. Unable to push his opponents to the sea, lack of armored means on site, Dollmann is immediately in a very delicate defensive situation.

On June 26, 1944, the Germans lost Cherbourg, which fell into the hands of the attackers: Hitler informed his entourage that Dollmann would be tried at court martial for this lack of command. Having been warned, he died on June 28 in dubious conditions. Officially, he died as a result of a heart attack, but other sources (such as his chief of staff, General Pemsel) mention poison suicide. He is replaced by Paul Hausser.