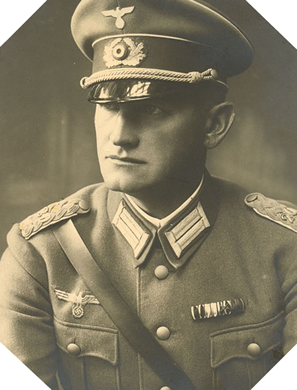 Josef Reichert was born on December 12, 1891 in Burgfeld. He joined the imperial army and participated as an officer in the Great War. After 1918, he made a career and served in the Reichswehr.

When the Second World War broke out, he was a colonel and took part in the invasion of Poland at the head of the 6th Infantry Regiment, then in the French Campaign, and also in Yugoslavia as part of Operation Barbarossa. Subsequently, promoted to the rank of general, he was appointed to the head of the 711th Infantry Division which moved to Normandy in order to defend the coast against any attempted Allied landing. This unit is positioned between Caen and Rouen and Josef Reichert installs his command post at Pont-l’Evêque.

When the Allies landed on June 6, 1944, Josef Reichert’s division immediately intervened to repel his opponents at sea but was grounded by the air force, which banned any German movement towards the beaches. Reichert orders his soldiers to settle defensively in the Caen area and the Anglo-Canadian forces break their momentum several times on his lines which are reinforced by German heavy armor.

But the Allied war machine overcomes German forces that are forced to retreat east of the Seine at the end of August 1944. Having suffered very heavy losses, his division is reorganized and reinforced in men and materials in Holland from September 1944.

Josef Reichert also took part in Operation Market Garden, which took place in the same month in Holland, and in Operation Frühlingserwachen launched by the Germans on March 6, 1945 in Hungary, where valuable oil reserves are located.