History of the landing on Sword Beach on D-Day, June 6th 1944 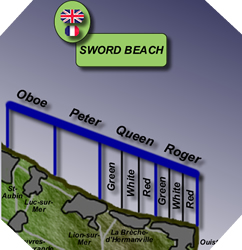