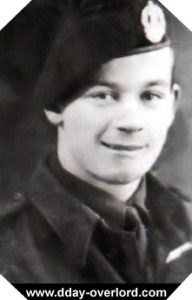 Bill Millin was born on July 14, 1922 in Glasgow, Scotland. He was only 21 at the time of the Normandy landings, at which time he served as a soldier in the 1st Special Service Brigade commanded by Simon Fraser, also known as Lord Lovat, fifteenth and twenty name -fifth leader of the Scottish clan of the Fraser. Millin becomes the Fraser staff bagpiper and is known in his unit to play regularly for his instrument during the rest phases in England before D-Day

Since World War II, a decree of the English War Office, the British Ministry of War forbade pipers (also known pipers) to use their instrument in the forefront for obvious tactical reasons and limited their jobs at the back lines. However, D-Day, Lord Lovat asked his piper to play in encouraging his men in the battle, in full traditional Scottish fighters. Fraser tells him: “You and I are Scots and it is an English decree, it does not concern us!” Millin runs and takes his bagpipe under his arm at the time of borrowing the ramp landing, opposite the German defenders of the Sword beach in La Brèche Hermanville.

Lovat asks him to play Hielan ‘Laddie and The Road to the Isles. As British troops landed under heavy enemy fire, the nasal sound of a bagpipe suddenly mingled with the sounds of explosions and machine guns. For a moment, according to the testimony of Corporal Maurice Chauvet Kieffer commando landing on the beach at this moment, the Germans stop shooting, dazed to attend such a scene. Bill Millin arrives unhindered and the beach falls into the hands of the Allies.

For the attackers, the war is not over yet. They must then raise the paratroopers troops of the 6th Airborne Division who have mastered the bridges over the Orne and the Caen Canal during the night of June 5 to 6, 1944. The British landed troops, accompanied by French commandos commanded by Philippe Kieffer, set out for these bridges at Bénouville and Ranville, south of Ouistreham. En route, the Allies are slowed down by German snipers. Nevertheless, they manage to reach the paratroopers at one o’clock, two minutes and thirty seconds precisely: Lovat apologizes to Major Howard and his paratroopers, who held all night and the morning of D-Day in the face of German attacks, for one hundred and fifty seconds behind the scheduled time.

Before crossing the famous Pegasus Bridge, the Bénouville Bridge, which is still the prey of German mortars and snipers, Allied soldiers fire smoke grenades to limit their exposure at the time of crossing. At the time of the crossing, Bill Millin resumes his bagpipes and the dismounted troops resume the progression to the sound of his instrument.

Mullen radio, a Kieffer commando member who disembarked at Sword Beach in the morning, hears a bullet ricocheting right behind him over the structure of the bridge. When he turns, he sees in the smoke one of his comrades wounded by the bullet of a sniper, a German sniper (this soldier dies a few moments later as a result of his injury). He lowers to help but is hit by a sniper and collapses, lifeless.

Bill Millin was immortalized by the film The Longest Day of 1962. His character is performed by the official piper of Her Majesty the Queen of Great Britain. England, Leslie Pipe Major of Laspee. Until his death, he went almost every year to Normandy to attend and participate in the commemorations of the landing, with his bagpipes and framed by many pipers.

After the war, Bill Millin wanted to give his bagpipes to various museums of the landing. The instrument he used at Sword Beach at the time of the landing is now visible at the Dawlish Museum in Devon (Great Britain). Another of his bagpipes is at the Pegasus Bridge memorial museum in Ranville, France.

He died on August 18, 2010 at the age of 88 at Torbay Hospital in Torquay, Devon, following a heart attack.