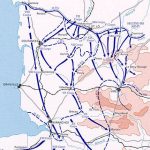 The beginning of the breakthrough

On the 26th of July 1944, in the north-west of the zone which served as the starting point for the offensive, four American divisions attacked: the 8th, 79th, 83rd and 90th infantry divisions. These units attack on two axes, one to the east, along the road linking the localities of Lessay and Coutances, and the other along the Périers-Coutances road. The American progression is also facilitated by the development of the hedge trimmer, the Rhinoceros, installed on the Sherman tanks, which allows an almost immediate crossing of hedges of the Norman hedgerow.

The German forces no longer oppose any real resistance, and the Americans are heading south: the village of Marigny is attacked and violent battles are fought in the vicinity. This village is defended by elements of the Das Reich division, supported by tanks and by the 353rd Infantry Division. The second armored division reached the village of Saint-Samson-de-Bonfossé at the end of the evening, after making the most important US progression of the day. But the best news for the Allies is that the front to the south of the Cotentin is finally open: the Germans are retreating into disorder and the tactics of Bradley is paying off: the tanks progress much more easily now because it is the infantry Which opens the road.

On the third day of the operation, the front is finally pierced to the south-west of Saint-Lô and the Americans now want to exploit this progression. East of the breakthrough, the 1st Infantry Division and the 3rd Armored Division repulsed the German defenders of the 2nd and 17th S.S. Panzer divisions  to the village of Camprond, a progression of six kilometers.

At the center of the breakthrough, the 2nd Armored Division passed the village of Notre-Dame-de-Cenilly, seven kilometers to the south, and reached the Saint-Lô-Tessy-sur-Vire road at Mesnil-Opac, Kilometers traveled since the beginning of the day. The town of Périers is finally freed by the soldiers of the 90th Infantry Division and Lessay falls into the hands of the troops belonging to the 79th Infantry.

Several tank fights were committed between the American armored divisions and the isolated elements of the S.S Panzer Division “Das Reich” and “Götz von Berlichingen”. The SS-Oscha (equivalent of warrant officer) Ernst Barkmann, belonging to the 2nd SS Panzer Division “Das Reich”, destroyed nine American Sherman tanks and several other vehicles of the 3rd Armored Division along the road linking Saint-Lô toCoutances, near the village of Lorey. But the Germans, although possessing some superior tanks in firepower, are unable to slow down the irresistible American advance.

Towards the gate of Brittany

On July 28, 1944, the 2nd and 3rd Armored Divisions progressed respectively to the south-east and south of the departure area of operation Cobra, while General Bradley’s 1st Army positioned north of Périers also progressed south. The capture the day before the cities of Lessay and Périers allow the American troops to engage two new armored divisions: the 4th and 6th.

The Germans retreated towards Coutances, which was reached in the evening by the 4th American Armored Division, which liberated the village of Saint-Sauveur-Lendelin along the way: its progress was dazzling and the enemy opposition very weak: nearly ten kilometers are traveled during this one day by the 4th Armored Division. The 84th German corps is jostled and an unexpected opening is offered to the Allies who now have the opportunity to progress towards Avranches.

The Germans try to regroup on the same line further south, linking the villages of Bréhal and Cérences. This line is called the “Weisse Linie” (the “white line”). However, many soldiers of the 84th Corps are encircled in the vicinity of Roncey by the 2nd and 3rd American armored divisions. Columns of vehicles try to escape the encirclement and head towards Coutances but it is too late. Three American divisions attack the pocket and silence it by means of violent bombing.

Almost 1,500 German soldiers are put out of action and another 4,000 are taken prisoners. 500 vehicles, including many heavy tanks, are destroyed. Henceforth, the American forces wanted to continue the German troops and to destroy them. They must also attack the white line.

On the evening of July 29, the American forces reached the villages of Cérences, Cambry, Lengronne and Saint-Denis-le-Gast. The 2nd Armored Division attacks in the direction of Percy.

The Germans are attacked in different places. The white line between Cérences and Percy was formed too hastily and the American firepower easily pierces this barrier on July 30 and continues its offensive in the direction of the South and in particular towards Avranches, true gateway to Brittany, located 50 kilometers south of the starting point of Operation Cobra. The south of Saint-Lô is controlled by the 2nd Armored Division and the 30th Infantry Division, which is continuing their advance to the south-east. To the east, Granville is liberated by the soldiers of the 6th Armored Division. The infantry divisions (4th, 8th and 79th) attacking the east, supported respectively by the 3rd, 4th and 6th armored divisions, liberated Gavray, La Haie-Pesnel, Bréhal and Avranches. At the end of the day, the Americans reached the villages of Pontaubault south of the offensive and headed for Saint-Hilaire-du-Harcouët.

Conclusion and consequences of Cobra

At the end of operation Cobra, the progress is dazzling, unexpected: the Germans are submerged and abandon their positions to the American forces and the bridge of Pontaubault, which opens the road to Brittany, is under allied control.

General Patton, commander of the 3rd US Army, is proud of his soldiers. Speed was the key to this operation and everything went according to plan. Some offensives, especially that of the liberation of Avranches, surpass all expectations. The Allies can now say: Cobra, despite its impressive losses, is a total success. The reports of the losses are as follows: nearly 18,450 American soldiers are out of fight (more than 5,020 of them have died) and about 15,000 Norman civilians have been victims of bombing and fighting since 24 July.