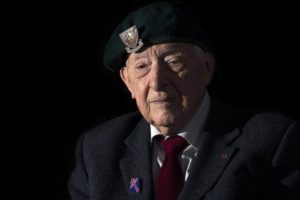 Hubert Faure was born on May 28, 1914 in Neuvic-en-Dordogne. He studied at the Jesuit school of Sarlat while his father, usher and veteran of World War I, died in 1933 from the wounds to the gas suffered during the battle of Verdun. The following year, he became a non-commissioned officer at the 22nd Dragons Regiment in Pontoise, before serving as an instructor in Paris. He studied the works dedicated to the Cavalry written by Charles de Gaulle with all the more curiosity that he served in a tank regiment of battle when the Second World War broke out in 1939. Hubert Faure is then engaged with his unit in reserve, behind the Maginot line, before participating in the Battle of Montcornet (Aisne) May 17, 1940, which sees the commitment of the 4th armored division commanded by Colonel de Gaulle.

He was taken prisoner in June 1940, but managed to escape and join the French forces when the Armistice was signed. When the Allies launched Operation Torch in North Africa on November 8, 1942, Hubert Faure decided to join the Free French Forces in England: it was the beginning of a long journey that, like his future comrade Maurice Chauvet leads him to Spain to be taken prisoner. Nevertheless, he escapes and rallies Portugal from where he manages to fly to England. In June 1943, one before the landing, he volunteered to join the French commandos led by Commander Philippe Kieffer. With excellent physical condition, steel morale and military experience, he is immediately noticed by the commando training at Achnacarry in Scotland. With the rank of Warrant Officer and his green beret on his head, he became Maître-Principal of the French Navy (equivalent of Chief Warrant Officer) and commanded a platoon within Troop 1. 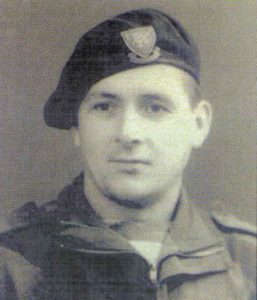 During the preparation of the landing, the French discover the silent maps and models of beaches to storm. With his men, Hubert Faure quickly recognized Normandy: “We knew it immediately. On the dining table, there were a lot of aerial photos of Norman beaches and maps. But we were forbidden to talk to anyone about it.” He remembers Commander Kieffer’s words before boarding to cross the Channel: “The commander told us that there would be a lot of casualties. Those who did not want to go could leave, he would not blame them. But no one has deflated. At this age, we are not afraid to die. It was a pride for us to participate in the liberation of our country.”

June 6, 1944, he landed with his men in front of the town of Colleville-sur-Orne (now Colleville-Montgomery) under heavy fire, being even blown by the explosion of German shells that take off the pleura and him make blood spit. He even received communion with Father Rene de Naurois, the chaplain of the commando, just after the landing. Less than two hours after the start of the assault, he becomes the only cadre of the Troop 1 still valid, the others having been wounded in the fire: starting at 8:15, the Troop 1 goes to the defensive complex of the Casino, a formidable set of bunkers and artillery positions that the French must storm. But Faure and his men are compartmentalized in their progression by the obstacles installed by the Germans. Despite four shots from PIAT, the German defense is holding. While Kieffer departs to defeat a British armored vehicle to support the French commandos, it is Hubert Faure who controls the forces involved and directs the firing of destruction. Once the casino neutralized, it goes successively towards Bénouville, the bridge Pegasus and finally Amfreville, where the commandos hold good against multiple German incursions during long weeks. Hit by a shrapnel, his wound is infected and he is repatriated to England on July 7, 1944, like many of his brothers in arms. Hubert Faure is however reengaged from August 15th in Normandy.

If he does not take part in the assault on Vlissingen with the other French commandos because of a wound in the spine, he joins his unit back at the front in the Netherlands during the assault of the Schouwen Island. But his condition is not improving and he must put an end to his military career at the end of the war in Europe. Resuming his studies, he became a public works engineer.
On July 14, 2008, Hubert Faure was elevated to the rank of Commander of the Legion d’Honneur, a decoration awarded by Admiral Philippe de Gaulle: “I wanted the badge to be given to me by someone from Free France. The admiral is a marvel of kindness. He is my neighbor, and my friend at the same time for thirty years.”