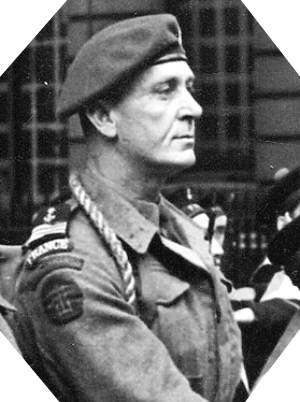 Philippe Kieffer was born on October 24, 1899 in Port-au-Prince. Her family came from Alsace and it was after the annexation of Alsace-Moselle in 1870 that she moved to Haiti.

His studies made him return to the metropolis: he studied in Paris and graduated from the Ecole des Hautes Etudes Commerciales (H.E.C.). Subsequently, he worked in Haiti, the United States and Canada as Bank Manager. He had a Creole accent.

He volunteered after the declaration of war and entered the Navy on September 10, 1939. He participated in the Battle of Dunkirk on the battleship Courbet. Philippe Kieffer heard the call of General de Gaulle on June 18, 1940: the next day, the ensign of ship leaves for London. He is one of the first volunteers to join the Free French Naval Forces.

Philippe Kieffer was entrusted with 16 volunteers in April 1942, who were training at Camp Camberley in Great Britain with Lieutenant Jean Pinelli. At the beginning of May 1942, the small troop (23 men) is patented at Camp Achnacarry (Scotland) and officially receives the title of “1st Company, Marine Commando”. While these men train at the Eastney depot, they are reinforced later by Lieutenant Charles Trepel, appointed Commander-in-Chief of Commander Kieffer. Commando training is extremely difficult, the events are selective: men must maneuver in all weathers, on all types of obstacles: marches, live ammunition training, close combat, etc.

On July 14, 1942, the small company composed of thirty units parade through the streets of London on the occasion of the French National Day. On August 10, the 1st Company is attached to No. 10 Commando Inter Allied, based in Wales, in which troops of all nations (Belgium, Holland, Norway, Poland, Czechoslovakia, but also anti-Nazis from Germany and Austria).

Commandos conduct a series of raids on the coasts of northwestern Europe (including the Dieppe raid on Operation Jubilee in August 1942) and continue their preparations for the Normandy landing. Shortly before June 6, 1944, Philippe Kieffer was promoted captain of corvette: D-Day, he landed on the beach Sword Beach between Colleville-Montomery and Riva-Bella with 177 soldiers. He is injured first time out of the water but continues his mission: he reduces the resistance around the bunker of the Riva-Bella casino and then goes inland towards Ranville to connect with the British paratroopers. of the 6th Airborne Division of General Gale.

The commandos meet the British paratroopers shortly after 12:30 pm at the Bénouville bridge, the famous post-mortem post Pegasus Bridge [/ postpermalink]. Commander Kieffer settles in the early evening in the woods of Plain near Amfreville where hard fights engage for several days with the German forces. Kieffer is injured a second time in the afternoon of June 6, 1944.

French Kieffer commandos continued their participation in the Battle of Normandy until 27 August 1944 in the east of the Orne before returning to England. They resume service in November 1944 by conducting a commando operation in the municipality of Flushing on the island of Walcheren in Holland.

After the Second World War, Philippe Kieffer began a political career and became for a year general counsel of Isigny-sur-Mer in Calvados in September 1945 (France-Combattante – Mouvement Républicain Populaire). He resides in Grandcamp-les-Bains in Normandy in a small house next to the church, where he writes his book “Green Beret” published in 1948.

He maintains many links with the army and participates as a member of the Consultative Assembly at the headquarters of the Combined Forces, before being promoted to Commander Frigate in 1954. Philippe Kieffer participates as a military advisor with another French commando, Maurice Chauvet, on the shooting of “The Longest Day” movie in 1962 before dying the same year following a hemiplegia. He is buried in Grandcamp-Maisy, Normandy.