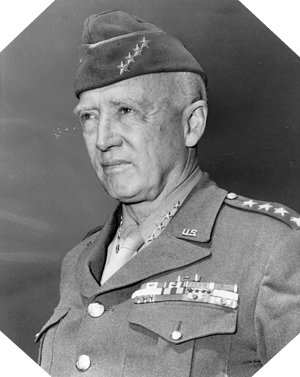 George Smith Patton was born on November 11, 1885 in San Gabriel, California to a wealthy family.

A connoisseur of the history of France (he speaks French), he is also interested in the history of Great Britain. A follower of classical Greek and Latin works, which he studied in the text during his youth, he is also a brilliant military historian who graduated from the VMI (Virginia Military Institute) Military Academy and then from West Point Academy in 1909. chose the cavalry: not out of financial necessity or by family tradition, but really by passion of the military thing. An excellent athlete, he participated in the Stockholm Olympics in 1912.

While World War I breaks out in Europe, Second Lieutenant Patton fights Poncho Villa’s troops in Mexico in 1916, where he is already noted for his audacity and courage: he even makes the front page of The New York Times and becomes a national hero.

Serving under General Pershing, Captain Patton took command of the newly-formed American Armored Corps and rose rapidly in rank. He was detached as an observer of the Allied troops before the deployment of American units in France, then he participated in September 1918 in the counteroffensive of Saint-Mihiel. Promoted to colonel, he was wounded during the Meuse-Argonne offensive.

After the war, he devoted himself to following his military studies and successfully passed the competitions of the staff school and the war school. This period is an opportunity for Patton to publish tactical works on the use of tanks on the battlefield, but also books on the game of bridge that he particularly likes and which are still used today.

In July 1940, when the French campaign had just begun, Patton took command of an armored brigade at Fort Benning: the difficulties in terms of equipment are felt and he does not hesitate to pay the coins out of his pocket. missing for its armored vehicles. This commitment to the benefit of his unit stands out: nicknamed “the old blood and guts” (the old blood and tripples), he took command of the 2nd American Armored Division in 1941 and was promoted to Major General.

After the attack of Pearl Harbor December 7, 1941 and the entry into war of the United States, It is deployed in Tunisia in the Torch operation. After the severe American defeat at Kasserine, inflicted by Marshal Rommel, Patton counter-attacked El Guettar and obtained a few weeks later the surrender of the Germans. This is a first victory for Patton who is known and feared by the Axis soldiers.

Criticized by the British who criticize him for his lack of discipline, General Patton competes with General Montgomery during the Sicilian campaign: he wants to be the first to enter Palermo and succeeds, but his soldiers are pushed to the limit: some are affected psychologically. Patton, who does not believe in these invisible wounds, slaps one in a field hospital in August 1943. This episode is widely commented in the United States and the American public is shocked: because of this incident, George S. Patton was sidelined for nearly a year before taking command of a fictional unit (1st Army Group) based in Britain, facing the Pas-de-Calais.

Patton is considered by the Germans as one of the best allied generals: according to them, if he is stationed facing the Pas-de-Calais, it is that the Allied landing will take place in this sector. This deception operation bears the name of Fortitude and aims to voluntarily deceive the German forces with a view to landing in Normandy. George Patton intervenes strictly speaking in the battle of Normandy only from the end of July 1944 at the head of the 3rd army. He directs the operation Cobra which pierces the front south of the Cotentin towards Brittany. The Americans make a bypass towards Paris and encircle thousands of Germans in the Falaise Pocket: they are progressing at a very important pace, 1,000 kilometers are made in just two weeks. Normandy is a territory he knows well, he visited during the inter-war and even wrote a treaty of tactics adapted to this type of fight. Patton applies a strategy identical to that of the German Blitzkrieg and only the problems of refueling really slow it down.

General Patton arrives at the gates of Lorraine on September 1, 1944. A difficult battle begins, especially for the conquest of the city of Metz, fortified by the Germans, which was taken in December 1944.

After the German counter-offensive in the Ardennes and Alsace, his 3rd army went to the aid of the paratroopers of the 101st Airborne Division surrounded by the Germans. This latest large-scale German attack has a strong impact on the Allied forces in Belgium and gives General Patton some grit to pursue his enemy as far as Czechoslovakia.

After May 8, 1945 and the surrender of Germany, this horseman loses his enemy and thus his favorite occupation: to wage war. But he quickly finds a new opponent: the Soviets. His anti-Soviet statements (“We were wrong opponents!” He says after the end of the war) make him lose the command of his “3rd Army” as well as his post of military governor of Bavaria.

He died December 21, 1945 in Heidelberg in Germany in a car accident … Under questionable conditions according to some American historians who do not hesitate to present the thesis of the assassination. He is buried in Luxembourg at Hamm American Cemetery.

George Patton is a colorful, hard-to-find character who remains a complicated character in American military history, a poet and an enthusiast who could not live without war. He also believed in reincarnation and was persuaded to have been a Napoleon’s general in one of his previous lives. It was immortalized by the eponymous film directed by Franklin J. Schaffner and released in theaters in 1970.