Amfreville in 1944 – Manche – Battle of Normandy

The village of Amfreville was placed in the spring of 1944 under the responsibility of Grenadier-Regiment 1058 (91. Infanterie Division). This commune became one of the objectives of the 507th Parachute Infantry Regiment (PIR) commanded by Colonel George V. Millet during the preparation phase of Operation Overlord. This regiment was to be parachuted as part of Operation Boston, less than one kilometer north of Amfreville, to accelerate the capture of the village and to secure the area northwest of the roadway of La Fière, a hub of the region. The drop zone (DZ) is coded “T”. F company commanded by Captain Paul F. Smith was in charge of seizing the commune.

In the early hours of June 6, 1944, the scouts were dropped to mark the drop zone T. But the Germans patrolled in the area and prevented the Americans from accomplishing their crucial task of marking. Only the stick number 2 under the orders of Lieutenant Charles Ames manages to activate the Eureka system which communicates directly with the C-47 transport aircraft. In addition, the launch series for the DZ T face a large anti-aircraft artillery barrage during their passage over the Cotentin. These shots, which are not very precise but very numerous, disorient the pilots and cause a feeling of panic within the formations held by the C-47s. The parachuting of the 507th PIR, which starts at 2 hours 39, takes place in very bad conditions: three sticks only land in the immediate vicinity of the DZ. The others are dispersed in the region, particularly in the marshes around the Merderet, and 180 paratroopers are dropped more than 20 kilometers from their jump zone.

Colonel George V. Millet is dropped northwest of Amfreville: once on the ground, he manages to collect only forty paras. With these small numbers, he headed to the south of the town of Amfreville to seize it. But the German resistance is particularly strong and the American means too limited; The paratroopers retreat one kilometer to the west at the height of the locality Les Landes which they seize.

Lieutenant-Colonel Charles J. Timmes, commanding the 2nd battalion of the 507th PIR, was dropped east of Amfreville. He succeeds in gathering only thirty paratroopers but when he hears shots coming from the village of Amfreville, wants to divert the attention of the Germans and storms the commune by the east. Faced with an opponent superior in number and prepared for defense, he fails to break the line and must retreat a kilometer to the east of the commune; Timmes installs his station in an orchard and has a 360-degree security perimeter. Without radio, he had to re-establish contact with his leaders and then decided to send a patrol of 17 paratroopers to Lieutenant Lewis Levy (company D, 507th PIR) in the direction of the bridge of La Fière. In the morning, his position is reinforced by a team of machine gunners whom Lieutenant Levy met on the way.

Throughout the day of 6 June, Timmes was isolated and his perimeter was constantly under fire from the enemy. The village of Amfreville is not under control but is gradually encircled by the paratroopers who regroup: 75 of them come to reinforce Colonel Millet at the place Les Landes. Several American prisoners are kept in Amfreville where they are questioned for long hours. For General Gavin, second in command of the 82nd Airborne Division, it is becoming more and more urgent to rescue these isolated elements on both sides of Amfreville, but the American paratroopers are blocked along the Merderet and do not succeed To break the German line of defense which is reinforced by the arrival of elements belonging to the Grenadier-Regiment 1057.

It was not until June 8 that the situation seemed to change. Colonel Harry L. Lewis commanding the 325th Glider Infantry Regiment (GIR) ordered Major Teddy H. Sanford to lead the 1st Battalion to cross the Merderet to the north of La Fière and to secure the causeway by establishing liaison with both Paratroopers located at the Landes locality than with those of Lieutenant-Colonel Timmes east of Amfreville. At the same time, Colonel Millet had to move eastward in order to find the friendly lines. But it is without counting on the German resistance in the sector: the Americans prove incapable of progressing so much the power of opposing fire is strong: Colonel Millet and several of his men are made prisoners. The airborne soldiers of 1 / 325th GIR succeeded in establishing the connection with Timmes and then continued the offensive towards the causeway, but had to turn back because of the resistance.

On June 9, a new American offensive was launched by the 325th GIR in the direction of Amfreville from La Fière, but it broke at the western end of the causeway, east of the Helpiquets hamlet. The losses recorded during this assault are appalling and the airborne soldiers, supported by paratroopers from the 507th PIR and the 508th PIR, put an end to the attack.

On June 10, at 5 am, the 357th Infantry Regiment commanded by Colonel Philip H. Ginder and belonging to the 90th Infantry Division crossed the road, the 2nd battalion in front, and began the assault of the hamlet of Motey but failed to upset The German defenders before Amfreville, firmly entrenched for several days. At nightfall, the 2nd Battalion is relieved on position by the 1st Battalion, which launches another attack at 9.30 pm without any further success. On 10 June at midnight, the 357th Infantry Regiment recorded 15 killed and 84 wounded during the first day of combat. On 11 June in the morning, the infantry renews the offensive and this time take the commune before progressing towards the hamlet of Les Landes. 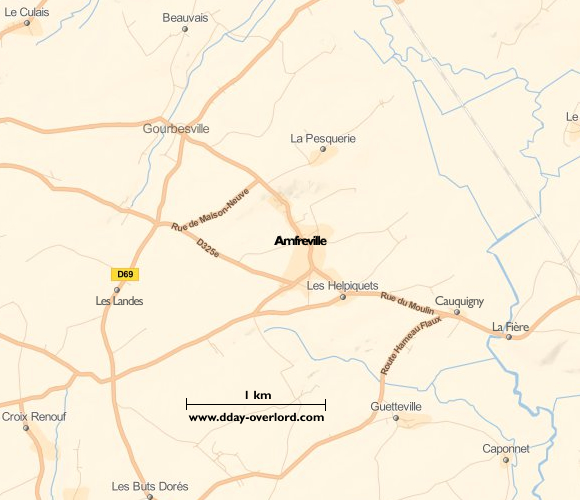