As early as August 12, 1944, when the XV Corps commanded by Major General Wade H. Haislip is only a few kilometers south of Argentan and continues in the direction of Falaise to close the trap in which 110,000 German soldiers are trapped, Lieutenant-General Bradley orders to temporarily stop any progress. According to him, the American troops risk to suffer losses by engaging in the last corridor still accessible to the Germans because of the permanent air attacks of the allied bombers. Many unexploded bombs and rockets risk detonating when friendly forces pass. Another fear is to engage US soldiers with Canadians moving north to south: errors in coordination can lead to heavy fratricidal losses between these two Allies. Moreover, since the Americans are already threatened by the adversary on their right flank, they have no interest in increasing the depth of their device and must retain the advantage of concentrating their forces. For Bradley, the best solution is to have the pocket close to only one of the two forces and leave this opportunity to his Canadian allies.

Meanwhile, the 116 Panzer-Division Germans took advantage of this day’s respite to consolidate Argentan’s defenses in order to keep the evacuation corridor open for as long as possible. The Americans launch a first armored assault on August 12 at 11 pm on the town whose catch must mark their final point of progression in the area before the closure of the pocket. Lieutenant General Patton, commander of the 3rd Army, decides to reinforce his device against Argentan with the 2nd French Armored Division (2nd DB) of General Leclerc and the 80th Infantry Division of Major General Horace L. McBride. The 5th Armored Division of Major General Lunsford E. Oliver is at the forefront of the American assault and the tanks of Combat Command A reach the German defenses before being repulsed by their opponents. A new assault is launched on August 13 at three in the morning without any success and the Americans lose seven Sherman tanks. Patton, unable to capture the town, gave orders to Colonel Bartley to have it bombarded at seven o’clock by numerous artillery strikes. Despite other assaults made during the afternoon, Argentan remains in the hands of the Germans.

On August 18, 1944, a new offensive was launched by the 3rd Army: the 318th Infantry Regiment of the 80th Infantry Division, supported by the tanks of the 610th Tank Destroyer Battalion (SP), was in charge of taking Argentan, French cover the southwest of the city. Four Sherman tanks engaged with the 318th Infantry Regiment (IR) were destroyed in the first few minutes of the attack and the infantry suffered heavy casualties due to machine gun fire and mortar shells. After five assaults between 14 and 19 August, all of which ended in failures, General Mc Bride decides to temporarily halt the advance and have the artillery given to break the German line of defense. Although the 116 Panzer Division began its retreat, its elements still hold the city, but the general situation is further deteriorating for the Germans, who on the same day lose the city of Trun and consequently its main axis of ‘extraction. For 48 more hours, they hold their positions in the ruins of Argentan which continue to be targets of furious allied bombardments. But on 20 August at 9 am, no radio contact could be established with the General Staff and the Germans decided to withdraw to the forest of Grande Gouffern in the north-east, thus abandoning Argentan to the 80th Infantry Division, which In the box.

The city is no more than a vast field of ruins. In spite of these terrible bombardments, the inhabitants express their gratitude to their liberators through their mayor, Yves Sylvestre, who decorates the destroyed façade of the town hall with a huge American flag on August 20 in the presence of Colonel Harry D. Mac, commander of the 318th Infantry Regiment. 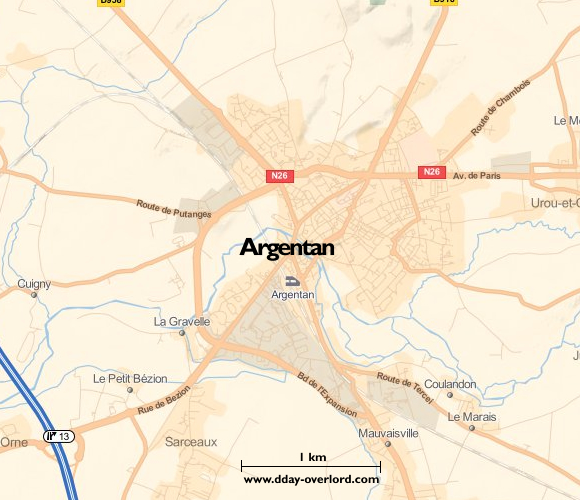