Arromanches-les-Bains in 1944 – Calvados – Battle of Normandy

The beach of Arromanches-les-Bains (or Arromanches) is known since at least the 18th century for the calm of the sea at this place. On old maps of the area, this place is listed as a privileged place in case of anchorage.

Two centuries later, the Allies plan to install an artificial port, built in Great Britain, towed across the Channel and mounted piece by piece. They plan to install two: one in front of Colleville-sur-Mer (called code Mulberry A), the other before Arromanches-les-Bains (Mulberry B).

The village of Arromanches is encased between two cliffs and the Allies do not want to transform this locality into a field of ruins. This would have the effect of rendering the roads impassable and all the refueling landed from the artificial harbor would be delayed to the front. There will therefore be no landing in front of Arromanches: the Allies are planning to take this locality with backhand to avoid any bombing and useless destruction.

However, if this locality is integrated into the “Gold” beach area, no unit landed in front of Arromanches-les-Bains on June 6, 1944. The regiment which was to capture Arromanches, the 1st Battalion Hampshire Regiment commanded by Lieutenant-Colonel David Nelson-Smith, landed in front of Asnelles and advanced westward. The Germans, belonging to the 1st Battalion of the 916. Grenadier-Regiment of the 352nd Infantry Division, defended themselves relentlessly and slowed down the speed of English progression. Around 7 pm, the first units of the Hampshire Regiment reached Arromanches and captured the Kriegsmarine radar station at the top of the eastern plateau. At 10.30 pm, all the pockets of resistance were destroyed and the village was fully liberated.

It is on the evening of D-Day that the first buildings to be used as breakwaters arrive off Arromanches. They scuttle in the days that follow. The construction of the Mulberry B artificial port begins on 7 June 1944 and in the village a few houses are intentionally destroyed to allow the convoys to take the roads without difficulty.

The first unloadings are carried out from 14 June.

A strong storm on June 19 destroyed the port dedicated to the Americans in Omaha Beach, Mulberry A. The one of Arromanches has suffered many damage but is easily repairable; It will run alone for a month, discharging nearly 10,000 tons of equipment per day.

During the Battle of Normandy and for the two artificial ports: 400,000 soldiers, 500,000 vehicles and 4 million tons of equipment transited through Mulberries A and B. During the last week of July 1944, traffic is at its best with 20,000 tonnes unloaded per day. The Mulberry B port of Arromanches is used until November 19, 1944.

Today, many vestiges of this artificial port remain in the bay of Arromanches. 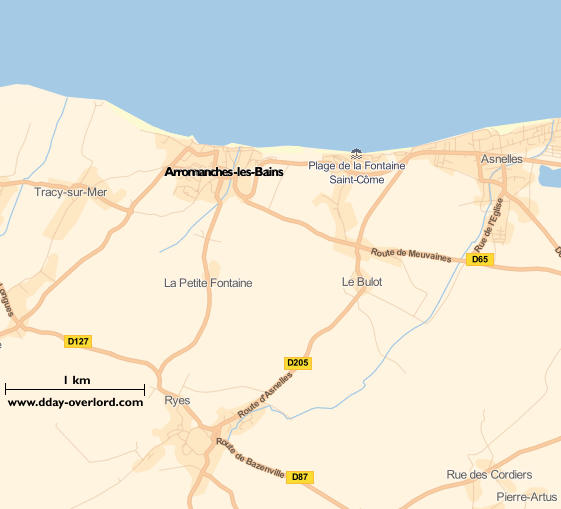