Audouville-la-Hubert in 1944 – Manche – Battle of Normandy

In the spring of 1944, the small village of Audouville-la-Hubert was occupied by personnel of the 3rd Battalion of the Grenadier-Regiment 919 (709 Infantry Division). It is located at the end of one of the five roads connecting the coastline inland by crossing the areas deliberately flooded by the Germans. The Allies coded this departmental road 67 “Exit 3” (exit 3) and made it one of the major objectives for American paratroopers on the night of June 5 to 6, 1944.

Audouville-la-Hubert is located to the east of the drop zone of the 502nd Parachute Infantry Regiment of the 101st Airborne Division. At 7.30 am on June 6, 1944, and in spite of great difficulties during parachuting, the men of Company I of the 3rd Battalion of the 502nd PIR (commanded by Captain Ivan R. Hershner, Jr) seized the few houses and Audouville-la-Hubert farm and await the arrival of troops disembarked, securing one of their exit routes. Shortly after their installation, at 9.30 am, the paratroopers ambushed the German soldiers leaving the landing area at the end of exit number 3.

The 1st Battalion of the 8th Infantry Regiment (4th Infantry Division), commanded by Lieutenant-Colonel Conrad C. Simmons, begins its advance on Departmental 67 starting at 11 am: this unit is responsible for liaison with the airborne troops. The road is very narrow, slightly submerged by the waters in places, and the first traffic jams are formed: two Sherman tanks of the 70th Tank Battalion and a bulldozer get bogged down, greatly impeding traffic. German soldiers try to retreat to the west but they are trapped, the exit of the marsh is still under American control.

The paratroopers and the American infantrymen made their junction shortly after noon in Audouville-la-Hubert. At 7 pm, precursors of the staff of the VII Corps american settled under the orders of Major General Eugene M. Landrum in a farm of the hamlet. 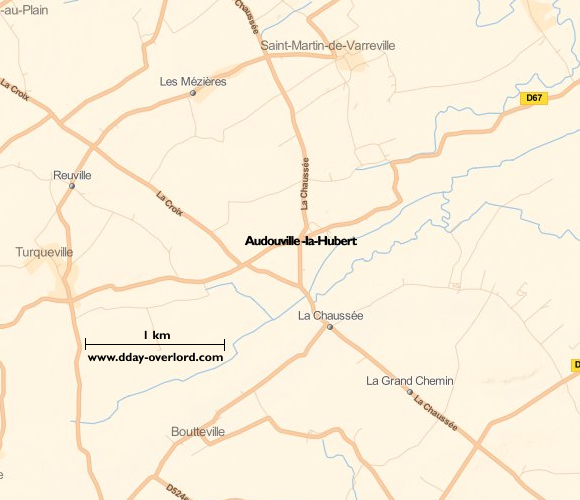