In 1944, Auville-sur-le-Vey is a small hamlet held by the German soldiers of Grenadier-Regiment 915 (352. Infantry Division). This town has since changed its name and corresponds to the present village of La Blanche.

On the morning of June 9, 1944, Company K of the 175th Infantry Regiment (29th Infantry Division) under the command of Captain John T. King III advanced from Isigny-sur-Mer to Cotentin to establish the link with 101st Airborne Division. The infantrymen reached the approaches to the bridge over the Vire, which the Germans had set fire to, and they were caught under the fire of machine-guns and mortars. Reinforced by a platoon of Sherman tanks, a section of Company E and by members of the Regimental Reconnaissance Section, Captain King’s men twice launched themselves into the bridge. At 6 pm, while King was wounded twice and had to be evacuated, company K managed to reach the hamlet of Auville-sur-le-Vey and settled there after pushing back the Germans. The infantry installed its roofing device in the buildings to protect the bridge repair operations carried out during the night of June 9 to 10 by Company C of the 254th Engineer Combat Battalion.

At the dawn of June 10, the Americans resumed their advance towards Catz. 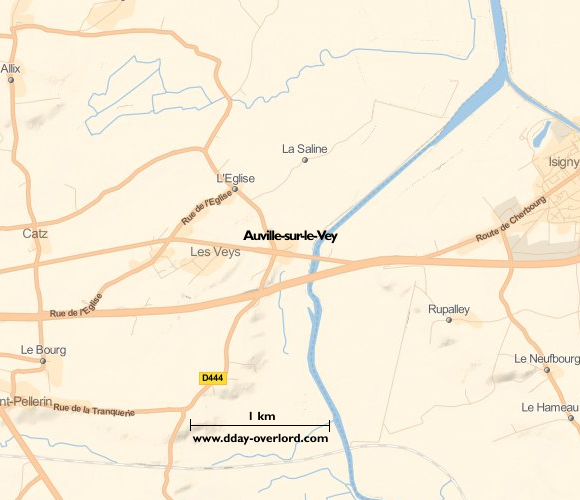