Avranches is the target of violent bombings as of June 7, 1944 which are supposed to slow the arrival of German reinforcements towards the landing beaches. At 1430 hours, three successive waves of bombers dropped their bombs on the city, which soon became the prey of the flames. 80 people are killed during this air raid.

One of the objectives of Operation Cobra, which begins on July 25, 1944, is to seize the town of Avranches: on the one hand this town is situated on a high point allowing to have views on the region, On the other hand it represents the gateway to Brittany. The American progression is dazzling, unexpected: the Germans are submerged and give up their positions to the opposing forces. As early as July 30, 1944, the 4th Armored Division commanded by Major General John Shirley Wood was only a few kilometers north of Avranches. Allied aircraft flying over the area observe that the population is waving French flags as they pass, which could mean the absence of German troops in the area. The Combat Combat B (CCB) of the 4th Armored Division began the reconnaissance of the city’s surroundings in the evening and the information obtained confirms the information transmitted by the Allied Aviation: obviously, the Germans do not defend Avranches. Brigadier General Holmes E. Dager, commander of the CCB, receives from Wood the commander of the 4th American Armored Division’s forces in the area. At nightfall, the CCB secures the approaches to the bridge north of the city, which overlooks the coastal river Sée, deserted from any German presence. Dager is reinforced by new units (including Combat Combat A and a regiment of the 8th Infantry Division). The leading elements take up position but soon encounter a column of German soldiers and trucks heading north. The Americans believe first of all that they are wounded who evacuate the front, but the latter open fire. Soldier William H. Whitson showed a courageous way: with his 7.62 mm (Browning 30. Caliber) machine gun, he killed 50 and put out about twenty vehicles in his opponents’ Be slaughtered in turn. However, the elements of the 4th Armored Division are obliged to retreat, the Germans take advantage of it to strengthen their positions but do not secure the bridge over the Sée.

Before the dawn of 31 July 1944, General Dager’s men crossed the bridge and encountered new columns of German soldiers, who were obviously disorganized and retreated. Short but violent fights are committed and it is during one of these skirmishes that the. At dawn, the Germans counterattack but they are caught under the armored and P-47 fighter-bomber shootings of the Americans: several hundred of them go to the end of the leap. Early in the afternoon, Brigadier General Dager considers that Avranches is under control and that the Germans are no longer able to carry out a serious counter-attack to take over the commune. He immediately ordered the CCA to proceed in the direction of the bridges on the Sélune in the south. In order to allow the 4th Armored Division to remain organic, the 6th Armored Division of Major General Robert W. Grow comes to take position in the sector of Avranches.

At the beginning of August 1944, the Germans wanted to resume the initiative and take back the town of Avranches. To this end, they are designing Operation Lüttich. But the offensive, which begins on August 7, fails with very heavy losses. Avranches is not worried by this operation. 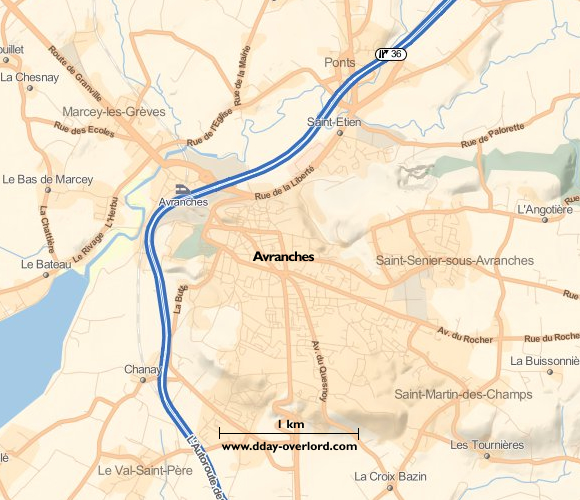