La Barquette is a hamlet of the commune of Saint-Côme-du-Mont. It consists of three buildings and a lock on the Douve which represents a key point of the sector since the whole area is flooded by the Germans since 1943. When planning the Overlord operation, the Allies make different crossing points on the Douve of priority objectives on D-Day: the lock of La Barquette is part of it.

The Barquette lock is defended by German soldiers belonging to the 3rd Battalion of Grenadier-Regiment 1058 (91. Infantry Division). It is the 1st battalion of the 501st Parachute Infantry Regiment (101st Airborne Division) under the command of Lieutenant-Colonel Robert C. Caroll who receives the missions to seize and hold the lock in the early hours of June 6, 1944. La Barquette must be under control to prevent the Germans from counterattacking from this crossing point as well as from opening the lock. Indeed, if the locks are open at high tide, this has the effect of flooding the land between Saint-Côme-du-Mont and Carentan, limiting the possibilities for travel.

In order to quickly access La Barquette, the 1st battalion of the 501st PIR is scheduled to be parachuted about one kilometer north of the lock of La Barquette, over drop zone coded “D”. The dropping starts on June 6, 1944 at 1:26 am and two-thirds of the airborne soldiers land on or near the drop zone which is already partially flooded. The executives of 1/501st PIR are hard hit during the jump: Lieutenant-Colonel Caroll is killed, his deputy Major Phillip Gage is wounded and taken prisoner, and unit commanders can not be found. However, the 501st PIR corps commander, Colonel Howard R. Johnson, landed by mistake near La Barquette and took the initiative to seize it himself. In the hours after the jump, “Jumpy” Johnson gathers as many paratroopers as possible, coming from different companies (as well as the 506th PIR). At dawn, 150 parachutists are under his command and the corps commander decides to start the progression towards the lock of La Barquette. He ordered 50 of his men commanded by Lieutenant Farrel, an advanced observer of the naval artillery, to seize the area while the remaining 100 remained in reserve. The assault elements crossed the lock and settled on the other side of the Douve, seizing La Barquette without difficulty and quickly digging shelters in the event of an opposing counter-attack. The lock keeper’s house, abandoned, is invested by the paratroopers.

Throughout the day of June 6, the American paratroopers holding the lock were subjected to heavy artillery and mortar fire from both the eastern region of Carentan and Saint-Côme-du-Mont. Lieutenant Farrel requested and obtained fire support from the 203 mm guns of the USS Quincy heavy cruiser: this intervention considerably limits the density of German shots on the La Barquette lock. Colonel Johnson took the opportunity to try to widen the perimeter that he held at the height of the lock and ordered its southern elements to widen by 200 meters the controlled area. At 20 hours, the position of La Barquette is held by 280 paratroopers who are installed in defensive positions during the night.

At dawn of June 7, 1944, the Germans continued the firing in the area of ​​the lock. The paratroopers of the Fallschirmjäger Regiment 6 from Carentan harass the Americans who are starting to run out of ammunition. At 6:30 am, an airplane carrying refueling flies over La Barquette and makes a drop for Colonel Johnson, but the containers are parachuted into the marshes beaten by the fires and can not be recovered. In the afternoon, around 3 pm, American paratroopers detect soldiers approaching from the north-east, which can not be immediately identified: they are German soldiers from Vierville who are withdrawing to Carentan. Johnson, banned from the south, re-articulated his device to take into account the northeast of the lock and is preparing to open fire on the adversary who crosses the flooded grounds. When the Germans are about 350 meters away, he orders the firing of shots: surprised, their opponents fight back and camouflage as much as possible in the tall grasses in the vicinity. They fire a flare that triggers a new artillery barrage on the lock shortly after. A few minutes later, while the ammunition was running out, Colonel Johnson ordered the shot to be stopped. For the corps commander of the 501st PIR, the Germans want to surrender: he asks for two volunteers equipped with an orange flag and progresses to meet his opponents when suddenly the shots resume, wounding him and one of his men. The three soldiers are then forced to crawl over a little over 100 meters to find their line.

The firing continued for an additional 30 minutes before Colonel Johnson again ordered the firing stop to give the Germans a chance to surrender. Always accompanied by two paratroopers, he succeeded this time in establishing liaison with two German soldiers who wished to surrender: however, the officers forbid their surrender and threatened to execute them. Johnson then sends the following message to the opposing side: they have 30 minutes to go, in case of review they will be neutralized by a much greater force. The firing on the front line continued, but after half an hour, several dozen German soldiers commanded by a lieutenant-colonel went to the Americans. During this engagement, which saw the loss of 10 killed and 30 wounded in Colonel Johnson’s ranks, nearly 150 Germans were put out of action.

With the situation still not stabilized at La Barquette lock, Johnson and his men were kept in the defensive position throughout the day on 8 June. In the evening, the US paratroopers are relieved on position by the airborne soldiers of the 327th Glider Infantry Regiment.

The first hours of 10 June 1944 marked the launch of the offensive by US airborne and airborne troops to capture Carentan: the 327th GIR crossed the Douve and the threat to the Barquette lock was definitely removed. 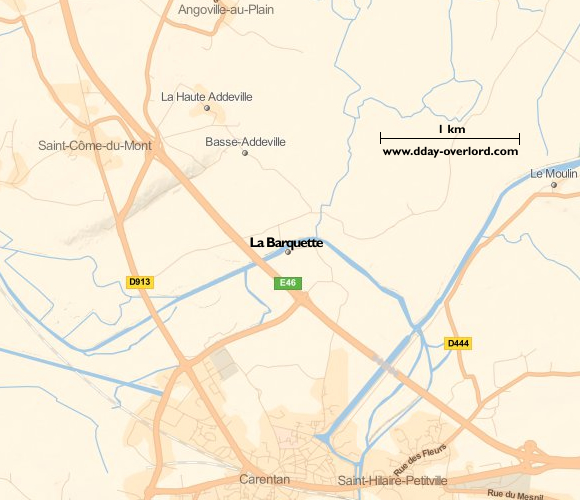