On the evening of June 11, 1944, a patrol of the 508th Parachute Infantry Regiment (82nd Airborne Division) was instructed to obtain intelligence in the Baupte area, but the boat carrying the Douve sank and the patrol was canceled. On June 12, the regiment was preparing for the offensive that was to take place during the following night: in the early hours of June 13, in full darkness, the 508th Parachute Infantry Regiment (PIR) crossed the Douve and progressed in discretion from Baupte to Through the marshes. At 5 o’clock in the morning, the 2nd Battalion commanded by Lieutenant-Colonel Thomas JB Shanley was in charge of seizing the village and settling to the southwest of that locality, seeking to establish liaison with 101st paratroopers Airborne Division. But shortly before reaching Baupte, the first elements of the battalion discovered German tanks which were immediately destroyed in the bazooka. These tanks belong to the Panzer-Ersatz-Abteilung 100, a training unit equipped with tanks of French origin.

About 2 kilometers north of Baupte, the paratroopers of the 508th PIR are taken to task by German infantrymen who stop the American advance. Throughout the day, fighting began on the outskirts of Baupte and the line of defense did not bend. Reconnaissance patrols are deployed to define the contour of adverse positions; The enemy’s strength is estimated to be one battalion equipped with tanks. At 4:15 pm, after an artillery preparation, the 2nd Battalion began its attack: Company F was on the left flank, Company D of Lieutenant Norman McVicar on the right flank and Company E of Captain Eugene Hetland was in 2nd Support. During a violent battle lasting almost an hour during which no less than four German 20-mm guns were destroyed, company F seized the southern part of the commune and settled in defenses south of Baupte while the D company fights in the northeast of the village where it delivers a bloody battle against a formidable opponent, notably up to a German depot of various vehicles. Company E seizes the northern half of Baupte and settles there defensively while company U comes to help with the depot of vehicles where no less than 10 German tanks are destroyed. After the German withdrawal, company D took over fifteen opposing vehicles and moved to the east of Baupte.

On 14 June at 1:30 am, the 1st battalion of the 508th PIR reached Baupte and installed a defensive perimeter at 7 o’clock west of the commune. Half an hour later, he rejected a counter-attack by a German infantry company. Late in the afternoon, the Americans fear a greater counter-offensive in the sector and decide to retreat to a new line north of Baupte, leaving elements of company D to the south of the village. But the Germans did not seize Baupte, who was definitively liberated. 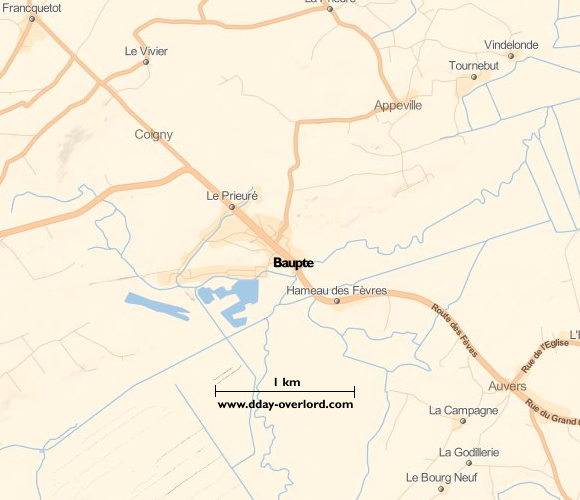