The municipality of Bavent in Calvados is situated on a high point and represents a compulsory crossing point between the east and west of the marshes of the Dives. The village is also bordered to the south by an important forest that bears the name of Bois de Bavent. The Germans who occupy the area belong to the 4th Battalion of the Grenadier-Regiment 736 of the 716. Infantry Division. The command post of the 4th Company of Ost Battalion 642 (composed of former Russian soldiers enrolled in the Wehrmacht) is located in Bavent.

The Allies wanted to secure the left flank of their bridgehead by destroying several bridges over the Dives and Divette rivers and then retreating to the compulsory crossing points by firmly holding them against any German counter-attacks. The 3rd Para Brigade of the 6th Airborne Division was in charge of this mission in the early hours of 6 June 1944 and the 8th Battalion Parachute Regiment was ordered to retreat to the level of Bavent wood. The troops disembarked at the dawn of D-Day then reinforce the paratroopers’ device and Bavent must be taken by the commandos of the 1st Special Service Brigade the day after June 6, 1944.

But on the evening of June 6, the Germans quickly reinforced the commune of Bavent. As early as June 7, 1944, the first elements of the 346 Infantry Division were in position against British paratroopers. While the 8th Battalion Parachute Regiment holds the wood of Bavent and conducts numerous patrols to deceive the enemy on the exact number of paratroopers present in the area, the Allied and German effort is concentrated more to the northwest , At the height of the village of Bréville. Despite this, the Canadian paratroopers of the 1st Canadian Parachute Battalion (3rd Para Brigade) carried out several reconnaissances of the village day and night to test the defensive German device. Canadians also trap the stations and roads along Bavent, especially during the night of June 7-8, 1944.

In the weeks that followed, the front did not evolve and it was not until the launch of Operation Paddle in August 1944 that the situation changed. This offensive directed towards the Seine begins on the night of 16 to 17 August and the No. 4 Commando (1st Special Service Brigade) seizes Bavent without major fights. The village is nothing but a heap of ruins. 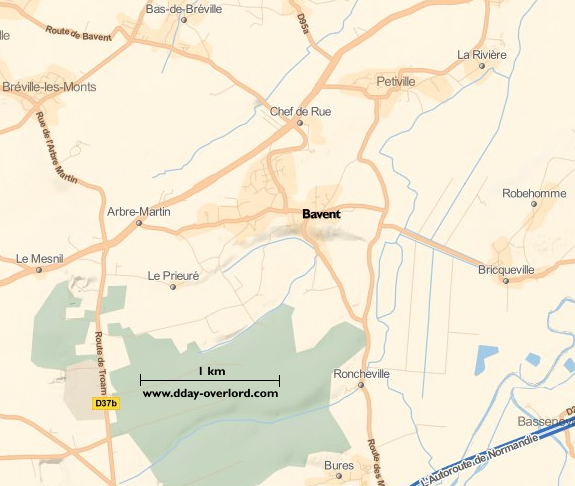