Bazenville in 1944 – Calvados – Battle of Normandy

In the spring of 1944, the commune of Bazenville was occupied by the command post of the 6th company of the Grenadier-Regiment 726 (716. Infanterie-Division) commanded by Hauptmann Adolf Kukenhoner.

On June 6, 1944, the first unit allied to cross the village of Bazenvile was the 502nd RASC (Royal Army Service Corps) Company, which was responsible for recognizing the practicability of the axes for the benefit of the infantrymen of the 6th Battalion Durham Light Infantry Regiment (151st Infantry Brigade) that follows shortly after. The infantry, supported by a squadron of tanks belonging to the 4th / 7th Dragoons Guard (8th Armored Brigade), then progressed towards Bayeux. The 69th Infantry Brigade in turn reached the outskirts of Bazenville as it progressed towards the national road 13 which it was to reach in the evening. But around 4 pm, the Germans counter-attack in the area: they belong to the Grenadier-Regiment 915 (352. Infantry-Division) commanded by the Oberstleutnant Karl Meyer. After a brief but violent engagement, during which Brigadier Ronald H. Senior commanding the 151st Infantry Brigade and wounded and taken prisoner (he managed to escape that same day), the Germans retreated. The British advance to the south without worrying about Bazenville, abandoned by the adversary who fell further south.

The next day, June 7, Grenadier-Regiment 915 again counterattacked towards point 64, a field movement located on the western outskirts of Bazenville. Strong commitments took place and the Oberstleutnant Karl Meyer died when the British stormed his command post in the castle in the southwest of the village. His regiment was put out of action: of the 700 soldiers engaged, only forty were still valid at the end of the day. On the evening of June 7, Bazenville was definitely under British control.

From June 7 to June 14, 1944, the engineers of the Royal Engineers 16th Airfield Construction Group reinforced by elements of the RAF 3207 and RAF 3209 Servicing Commandos built an airfield called ALG B-2 east of Bazenville. The castle, damaged by the fighting, serves as the headquarters of the 83rd Group Control Center of the 2nd Tactical Air Force. The aerodrome is operational until August 28, 1944. 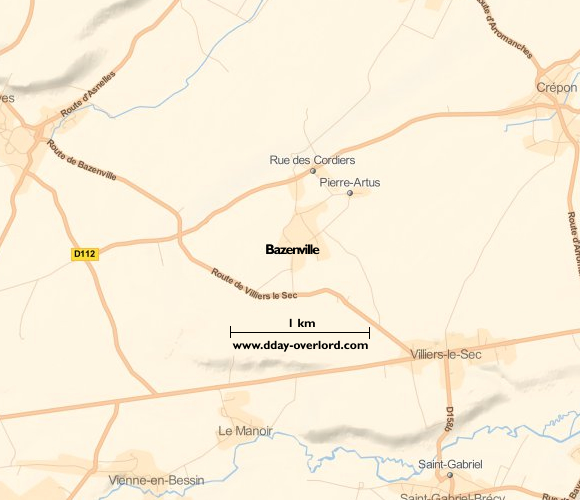