Beaucoudray in 1944 – Manche – Battle of Normandy

In September 1941, a network of resistance was founded in Beaucoudray by Henri Le Vieille: this network, rapidly called “Maquis de Villebaudon-Beaucoudray“, was fueled by explosives and armaments by the Allies by means of several parachutes. During the night of June 5-6, 1944, Radio Londres broadcast several coded messages intended for the resistance: “The most desperate are the most beautiful songs” triggers the purple plan designating the destruction of the lines of communication of the T.T. Several cables from the surrounding area are destroyed at night by postal workers. On 14 June at 10.30 am, the Germans invaded the abandoned farm in the village of Bois, north of Beaucoudray, on the edge of the Bois de Moyon and captured the resistance fighters who kept their various armaments there. Eleven prisoners were transferred to the hamlet of La Réauté and tortured, and at 4:30 am on 15 June they were executed in a field by the Germans. The bodies are then buried in two common graves. The youngest, André Patin, was 18 years old.

The Americans of the 175th Infantry Regiment of the 29th Infantry Division reached the outskirts of Beaucoudray as early as July 28, 1944. The area was defended by various German units belonging to the 2. Panzer Division and the 352. Infantry Division. A first offensive was launched on July 29th and Beaucoudray passed under American control. But as of July 30, the Germans were reinforced by elements of the 116. Panzer-Division just engaged on the front of Normandy and which launched an afternoon counter-offensive in this sector, repelling the 175th Infantry Regiment To the west of the commune of Beaucoudray which is abandoned by the Americans. Undergoing the strikes of the Allied aviation, the 116. Panzer Division can not break through this way any longer and must in turn retract. On 31 July, they held a new line of defense to the east of the village, which was definitively liberated by the American infantrymen. 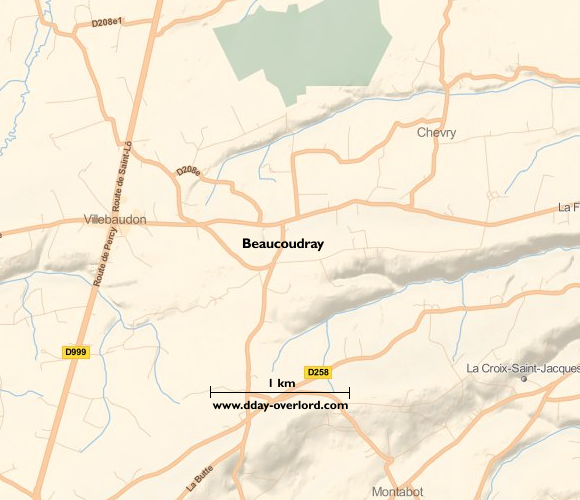