In the spring of 1944, the hamlet of Beaumont was occupied by soldiers of the third battalion of the Grenadier-Regiment 1058 (91. Infanterie Division). This community is located to the west of the “D” drop zone planned for US Airborne troops of the 501st Parachute Infantry Regiment and the 3rd Battalion of the 506th Parachute Infantry Regiment of the 101st Airborne Division.

On June 7, 1944, while the Americans were still deeply disorganized following the laborious parachutages and glider landings on D-Day, Colonel Robert Sink commanding the 506th PIR was ordered to seize Saint-Côme-du- Mountain. To this end, its 1st and 2nd battalions leave the town of Vierville in the early morning in the direction of the hamlet of Beaumont, companies A and B in front. Approximately 1,500 meters separate the two localities, but the paratroopers of the 506th PIR advance for nearly an hour and a half before reaching the outskirts of Beaumont: exchanges of shots slow down the columns but do not prevent the continuation of the American advance.

A hundred meters before entering Beaumont, company A, advancing on the left flank, is caught under the fire of a machine gun installed in a hedge. Composed of several buildings including a farmhouse occupied by the Germans, the hamlet of Beaumont is surrounded by imposing hedges which are so many positions favorable to defensive actions. Mortar shells exploded on the road, causing casualties in the 2nd echelon composed mainly of soldiers of C company and the staff.

Three M5 Stuart reconnaissance tanks reached the Beaumont area around 11 am. They belong to the 746th Tank Battalion and are hired at the head of the column by the 1st battalion of the 506th PIR under the orders of Lieutenant-Colonel William L. Turner. The tank leaders propose to fire a priori on the supposed positions of the machine guns. Turner, a former cavalry officer, accepts and climbs aboard the first light tank to guide the shots. He stands on the turret and advances the armor. Turner did not have time to travel a dozen meters before being mortally hit by a bullet in the head. Another Stuart was destroyed by a German rocket: the tanks immediately broke off contact by order of Colonel Sink and retreated into the Angoville-au-Plain area.

Major Foster takes command of the battalion: a 57 mm anti-tank gun is placed at the head of the device and supports a new assault by American paratroopers. Company B on the right flank and Company A on the left flank are responsible for fixing the adversary, while company C is ordered to bypass the hamlet by the east: “Charly company” thus makes a large turning movement , Crossing the road between Beaumont and Angoville-au-Plain, 300 meters east of company A. The maneuver takes place unhindered until the Americans discover an enemy in numerical superiority in front of them: the Germans make Crackle machine guns and paratroopers fall back to the road before attempting a new overflow. But Company C was ordered to retreat to the second level: Company B succeeded in breaking the line of defense and this success must be exploited.

Against all odds, the Germans reinforced their line and succeeded in repelling the American assault which had just received the support of two tanks. Unable to penetrate the opposing device, Company B is forced to withdraw. At 4.30 pm, Colonel Sink then decided to reinforce the 1st battalion by deploying the company D commanded by Captain Jerre S. Grosse. At this time, the “Dog Company” is strong of nearly 90 personnel making it the most numerous company of the 101st Airborne). Grosse positioned his unit north of Beaumont and allowed, by particularly fired shots, to support the new assault led by company B. The Americans seize the farm.

Pending the order to resume the progression, the defense of the hamlet is assured by the company C which takes over the company B. This short halt is interrupted by a large concentration of mortar fire at the Beaumont crossroads, causing New casualties in the ranks of paratroopers. The wounded are loaded on board a tank which transports them to the medical center located in Angoville-au-Plain. Company D moved up to the road and resumed progress at the top of the column starting at 9 pm. After a confused situation on the crossroads south of Saint-Côme-du-Mont, the fall is ordered and the paras of the 506th occupy Beaumont again from 1:30 in the morning, June 8.

It was only a few hours later that the offensive resumed in Saint-Côme-du-Mont. 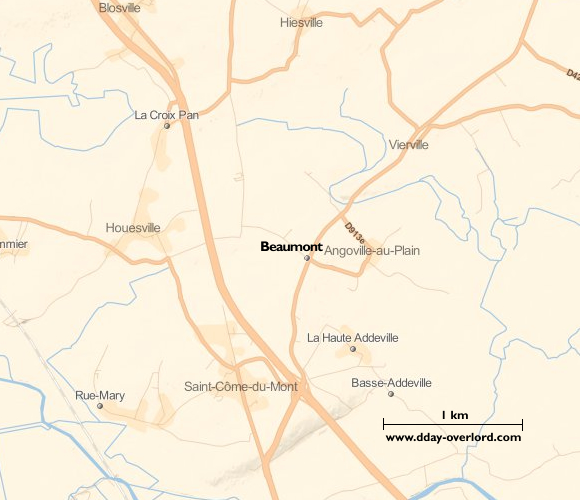