Bernières-sur-Mer in 1944 – Calvados – Battle of Normandy

The village of Bernières-sur-Mer is defended by a large anti-tank wall and by the strongpoint coded Wn 28 armed by soldiers of the 5th company (commanded by the Hauptmann Rudolf Gruter) of the Grenadier-Regiment 736, (716. infantry Division). The Wn 28 consists of a dozen shelters and several casemates for artillery pieces (including a 50 mm anti-tank gun).

The Canadians of the 3rd Infantry Division are responsible for disembarking on Juno Beach on D-Day. It is the 8th brigade of the division that receives as mission to seize Bernières-sur-Mer after landing on the sector “Nan White”. The Queen’s Own Rifles of Canada formed the first wave of assault, supported by the 10th Canadian Armored Regiment (The Fort Garry Horse).

The assault on Bernières-sur-Mer is preceded, as on the other beaches of the invasion, by an aerial bombardment and then by a naval bombardment, two hours before the disembarkation. But at the dawn of June 6, 1944, the sea in front of Juno was extremely rough and the Canadians landed ten minutes behind schedule. In addition, the bombardments were ineffective and both the anti-tank wall and the German defenses are still in place.

The Queen’s Own Rifles of Canada landed at 8:12 am. Company B was immediately in front of Wn 28 and the losses were very high. The amphibious tanks of Fort Garry Horse are also late and are sorely lacking on the beach. The infantrymen succeeded in circumventing the German defenses and seizing them on the reverse. When the first line of German defense fell into the hands of Canadians, the Queen’s Own Rifles lost 65 of its own on the beach. Company A, less affected than Company B on the beach, entered west of Bernières and began a slow progression under mortars and snipers.

The La Chaudière regiment (8th Brigade), composed of French-speaking Canadians, landed in front of Bernières-sur-Mer at 8:30 am. These men reinforced their comrades who had already been hard hit by the shock of the battle. Fort Gary Horse’s squadron B squadron finally arrived on the beach and supported the actions of La Chaudière.

Bernières-sur-Mer is entirely under Canadian control at the end of the morning. Major General Rodney Keller and the staff of the 3rd Infantry Division set up near the castle of Semilly, rue des Ormes, in the village at 12.45. 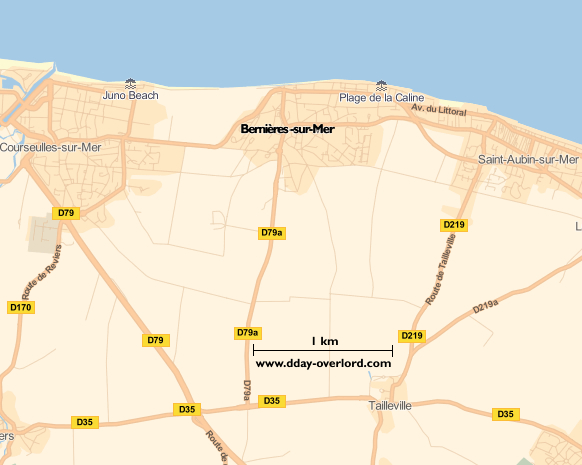