The locality that exists today under the name of Biéville-Beuville in Calvados consisted in June 1944 of two distinct communes: Biéville-sur-Orne in the south and Beuville in the north.

The commune of Biéville-sur-Orne was freed on the morning of June 6, 1944 by the 3rd British infantry division which did not meet any particular opposition and which continued in the direction of the city of Caen. The Germans entrenched in Beuville managed to fix the regiment of the King’s Shropshire Light Infantry which then tipped in support for the benefit of the Royal Norfolk Regiment which seizes the municipality.

In the afternoon of D-Day, German tanks belonging to the 22/Panzer-Regiment 22 of the 21 Panzer-Division manage to make a bold reconnaissance towards Sword Beach but which is countered at Biéville-sur-Orne. Eight Panzer IV tanks of this regiment are destroyed by the anti-tank guns served by the English soldiers. A company from the King’s Shropshire Light Infantry Regiment progresses to the Bois de Lébisey but fails to reach the city of Caen, as originally planned. 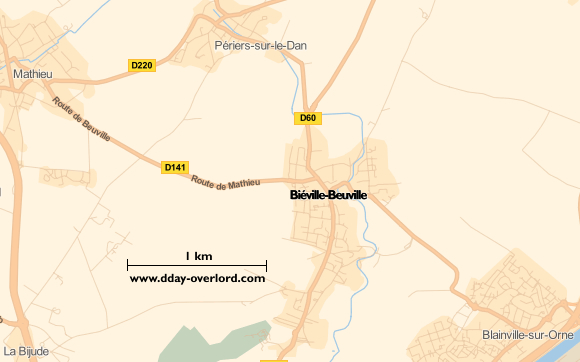