On August 1st, 1940, Biville is already witnessing the Second World War battles: Peter Edward Drew, pilot of a Bristol-Bleinheim fighter-bomber IVF N3601 FA-K belonging to the 236 Squadron, and Flying Officer Benjamin Nokes-Cooper, a gunner, were killed either by the German anti-aircraft defense or by the Oberleutnant Walter Adolph belonging to lll/JG27 “Afrika”, during a bomber escort mission to the Querqueville airport occupied by the Germans. The plane crashed at sea in front of Biville: the body of Peter Edward Drew was found on the beach on August 22, 1940.

After the landing of Normandy, the Americans began the battle of the Val de Saire as early as 19 June 1944, which led to the liberation of Cherbourg. The 9th Infantry Division, commanded by Major General Manton S. Eddy, is responsible for seizing western Cotentin and its key points defended by elements of the 77. Infantry Division and 243. Infantry- Division.

At midday on June 20, 1944, the 60th Infantry Regiment commanded by Colonel Frederick J. de Rohan reached the heights south of Biville and it was the 3rd battalion that was in charge of seizing this town. The Germans, located to the north of the commune, are located on high points overlooking the area from where they can observe and correct artillery fire: Americans are constantly bombarded by enemy shells during their advance. However, they seized Biville in the early afternoon and settled at the point 170, the main objective of the regiment: it is a hill located to the east of the town which allows to have views on the northwestern part of the Cotentin peninsula. 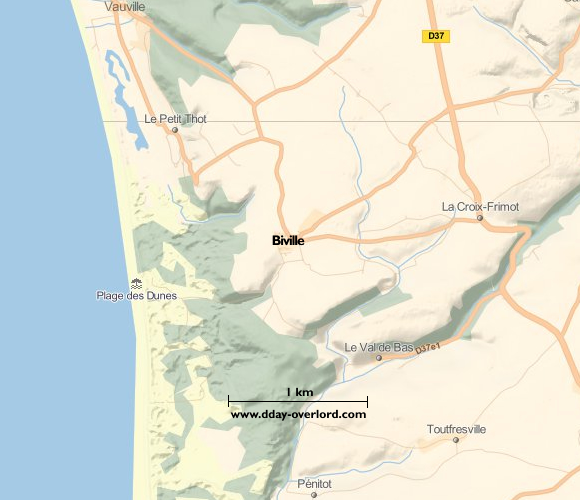