On July 18, 1944, the Allies launched Operation Goodwood, which aims to seize Caen by the east. The offensive began with a massive bombardment that destroyed the vast majority of German positions. The commune of Bourguébus is located in the area coded “P” by the allied aviation. The air attack is one of the most important fights in Western Europe and disrupts the German defenses held by the 1st SS Armored Corps. The British are taking advantage of it to advance on the first day of the operation, but they are quickly slowed down by the German forces who hold their positions. A battery of 88 mm guns is installed in the sector of Bourguébus and puts an end to the progression.

The fighting in the sector of Bourguébus begins on 19 July. They oppose the Germans of the 1. SS Panzer-Division “Leibstandarte Adolf Hitler” to the 7th British Armored Division. The Allies failed to seize Bourguébus and the Germans took advantage of it to settle in solid defensive positions, supported by a Tiger tank belonging to the Schwere SS Panzer-Abteilung 101 which is able to apply fires to the north from the community.

On 20 July at 5 pm, Squadron B of the 5th Battalion Royal Tank Regiment equipped with Cromwell tanks belonging to the 22nd Armored Brigade engaged in the fight to seize the weakly defended commune of Bourguébus (the Tigre tank was destroyed during assault). The British captured two Panther tanks abandoned by the Germans in the village area. 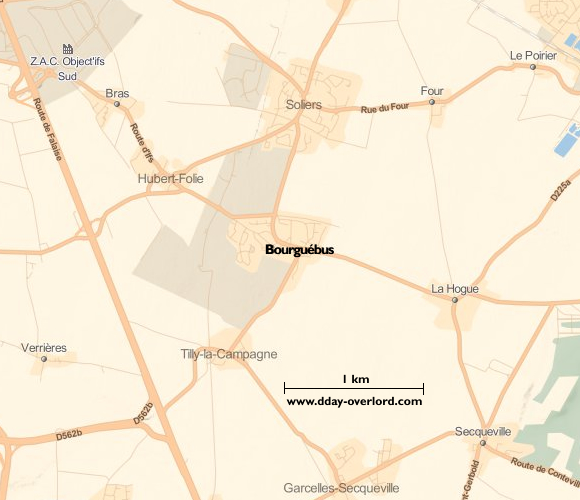