In 1944, the sector of Brévands is held by the German soldiers of the Grenadier-Regiment 915 (352. Infanterie Division). This hamlet is located on a high point on the eastern bank of the Douve which is crossed to the west of the place called Le Port by two bridges built by the Germans during the Occupation. These bridges represent the southern boundary of the bridgehead, and on D-Day pass under the control of the paratroopers of the 3rd Battalion of the 506th Parachute Infantry Regiment (101st Airborne Division) led by Lieutenant-Colonel Robert L. Wolverton. Indeed, these bridges represent the only crossing points of the Douve (with the lock of the Barquette) between the sea and Carentan and the Americans want to prevent the Germans to counterattack their head of bridge by the south. In case of a particular threat, parachutists must destroy the bridges with explosives. To this end, the third battalion of the 506th PIR is reorganized and exchanges its demolition section against that of the first battalion.

On the night of June 5th to June 6th, 1944, the drops were not going well and the paratroopers of the 3rd battalion of the 506th PIR were dispersed between Carentan in the south and Vierville in the north. Only 14 paratroopers manage to reach the assembly point originally planned and await their superiors. Lieutenant-Colonel Wolverton is killed while parachuting, while still in the air, east of Saint-Côme-du-Mont. His deputy, Major George Grant, as well as the unit commander of company G, Captain Harold Van Antwerp, also died in the early hours of the assault. The two surviving unit commanders (company H: captain Robert F. Harwick, company I: captain John T. McKnight) were made prisoners of war for the third battalion. The operational capacity of the battalion is reduced to nil just hours after the start of the action. It was Captain Charles G. Shettle, the battalion operations officer, who took command of the unit and as far as he could gather the isolated paratroopers (a little thirty) towards their objectives: the Brévands bridges. They reached the Douve around 4.30 am and were immediately taken to task by opponents on the eastern bank of the river: under fire, they seized the bridges and secured the approaches to the western shore, while new ones Parachutists come in reinforcements.

When Captain Shettle believes they are in sufficient numbers to attack German positions along the eastern shore, he launches his assault from the most southerly bridge and dubbed “Bridge 37”. Two volunteers belonging to company H, Private Donald Zahn and Sergeant George Montilio, cross the Douve under enemy fire and provide support for the rest of the paratroopers. They secure the approaches to the north-west of Brevands and settle in defensive, although lacking ammunition and provisions. Early in the afternoon, while Shettle still had no news of the operations of 101st Airborne in the Cotentin, he was informed by a courier that the lock of the tray was under control, held by a handful of Paratroopers of the 501st PIR directly commanded by their corps commander, Colonel Howard R. Johnson. But Colonel Sink, commanding the 506th PIR, does not know what his third battalion has become and imagines it is being destroyed.

The lack of communication between the various parachute elements has serious consequences, notably on 7 June when US P-47 fighter-bombers fly over the Brévands sector and attack the bridges, imagining that they are held by the Germans. This fratricidal attack inflicts additional losses on Captain Shettle, who already lacks fighters. The Germans, reinforced by the Fallschirmjäger Regiment 6 (91. Infantry Division), multiply the shots in the sector of the bridges and launch several offensives, obliging the paratroopers to retreat on the west bank. But Shettle’s men hold on and control the bridges. This fierce resistance gives the 101st Airborne the temple to reorganize after this difficult phase of airborne assault.

Captain Shettle was gradually strengthened by several units on the evening of June 8, in particular the 327th Glider Infantry Regiment (327th GIR) commanded by Colonel George S. Wear. The first hours of June 10, 1944 marked the launch of the offensive by American airborne and airborne troops to capture Carentan. The 327th GIR crossed the Douve and went to Brevands, which it captured at dawn before continuing southwards towards Catz. 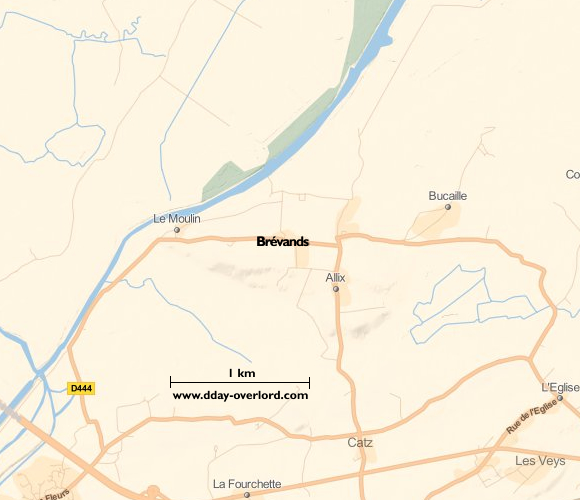