Bréville-les-Monts in 1944 – Calvados – Battle of Normandy

The municipality of Bréville-les-Monts in Calvados is located to the northeast of “N” drop zone dedicated for the 6th Airborne Division. It is located on a terrain that allows one to have views of the entire Ranville jump zone and the airborne division sector to the northeast of Caen, which gives it a major interest for both camps.

After their respective actions carried out in the early hours of 6 June 1944, the Anglo-Canadian paratroopers of the 3 Para Brigade had to settle in defensive positions on the heights between Bréville and Hérouvillette. But the Germans do not let themselves be dislodged and hold their positions firmly. After the reinforcement of the 6th Airlanding Brigade arrived by gliders on D-Day at 9 pm as part of Operation Mallard, the British decided to make an effort on this Bréville salient on the night of June 6-7. The 9th Parachute Battalion was ordered to seize the municipality as well as the castle of Saint-Côme and the Bois des Monts to the south-east, in order to control the plateau which dominates the surroundings. The paratroopers set off at about 1:30 am and digged combat positions on the outskirts of Chateau Saint-Côme and Bréville. The Germans who defend the area belong to the Grenadier-Regiment 744 (commanded by the Oberst German Maier) of the 711. Infanterie-Division.

On the morning of June 7, No. 6 Commando (1st Special Service Brigade) commanded by Lieutenant-Colonel Derek Mills-Roberts and located at Plein, south of Amfreville, was captured by mortars from Bréville . The English launched an assault on the village they cleaned: they made several prisoners and destroyed four pieces of artillery before retreating to their base, leaving the Germans to take Breville a few hours later. These were gradually reinforced by the 346. Infantry Division, particularly by Grenadier-Regiment 857. On June 8, the paratroopers recognized the castle of Saint-Côme and seized it without fighting. The German reinforcements carry out an offensive reconnaissance directed towards the positions held by the company A of the 9th Parachute Battalion: they are quickly repulsed by the paras. The arrangements of companies A and C are repeatedly tested by the Germans on the same day.

The next day, June 9, Grenadier-Regiment 857 launched a coordinated offensive on the positions of Companies A and C after a major artillery preparation. Once repulsed, the Germans revived the assault an hour later from the woods south of the Chateau Saint-Côme without any more success. Infiltrations through the Bois des Monts continue and Lieutenant-Colonel Otway maneuvers with company C and part of his staff to postpone the enemy’s assault once and for all. His action allows the neutralization of 19 German soldiers and the capture of one of them. Around 9 pm, about forty parachutists of the 9th Parachute Battalion, isolated and without news of their unit since D-Day, finally join the regiment.

On 10 June the Germans launched a new offensive, more important than the day before, which took as its point of departure the commune of Bréville and which was directed towards the bridges over the Orne and the Canal de Caen. Of artillery touches several positions of the 6th Airborne Division in the depth. Then the soldiers began the assault: they belonged to the 2nd Battalion of Grenadier-Regiment 857, 1st and 2nd battalions of Grenadier-Regiment 858 and Grenadier-Regiment 744. Pushed back to the Amfreville area, the Germans, who Are reinforced with tanks and self-propelled guns, manage to seize the castle Saint-Como. Continuing their offensive beyond Bréville in the direction of Ranville, they were finally stopped by the courage of the paratroopers supported by the guns of the naval guns (especially those of HMS Arethusa).

The Allies are therefore seeking to strengthen their system to the east of the Orne and deploy the 51st Highland Infantry Division from 11 June. It is the 5th Battalion The Black Watch that is in charge of taking Bréville, still in the hands of Grenadier-Regiment 857. The attack begins at 4.30 am after an artillery preparation: a rolling fire precedes the infantry Which must cross an overdraft of 230 meters before reaching the village. The assault is a complete failure: 200 English soldiers are put out of action. The 3rd Battalion of the Grenadier-Regiment 858 counter-attack in the stride but fails to break the front line, their attempt is rejected by the Allies. Armored elements from the 13th/18th Royal Hussars (27th Armored Brigade) reinforced the Black Watch in the early afternoon, but three tanks were destroyed during their phase of approaching the Castle of Saint-Côme by German self-propelled guns. Reinforcements of the Royal Hussars make a U-turn. Throughout the night of June 11-12, the Germans deployed several patrols to define the exact outline of English positions in the Bois des Monts sector: parachutists heard the enemy’s vehicles approaching the front line.

At 12 o’clock on the 12th of June, the English, positioned in the Bois des Monts, undergo an artillery fire lasting three hours. The Germans launched a new armored assault to the castle of Saint-Côme: all the anti-tank guns of the Black Watch and nine of their Bren Carriers were destroyed during the fighting and the British had to retreat into the woods where they joined the 9th Parachute Battalion. The fighting continues with extreme intensity until 8 pm: Meanwhile, Lieutenant-Colonel Otway reports that he is no longer able to keep the front line any longer with his regiment. General Gale commanding the 6th Airborne Division understands the situation well, and according to him, it is necessary to restore freedom of action to its units by pushing the Germans beyond Breville.

The capture of Bréville is to be carried out by the 6th Airborne reserve: this is the company D of the 12th Battalion Devonshire Regiment (6th Airlanding Brigade), the 12th Parachute Battalion (5th Para Brigade) and the 22nd Independent Parachute Company, supported by a squadron of the 13th/18th Royal Hussars and by the artillery of the 53rd Airlanding Regiment Royal Artillery. The assault, which is scheduled to begin at 10 pm, is commanded by Lieutenant-Colonel Johnny Johnson, head of the 12th Parachute Battalion. Ten minutes before the attack, the English artillerymen opened fire and the Germans immediately retaliated with their own artillery. The assault is given, company C of the 12th Parachute Battalion in the lead: very quickly, the officers of this company are put out of action. The paratroopers manage to enter the village of Bréville in flames, there are only about fifteen soldiers still able to fight in company C. Company A also knows very heavy losses: Major Gerald Ritchie commander The company is injured and the second section no longer exists. Company D of the 12th Battalion Devonshire Regiment then left its base at Amfreville and the unit was taken under artillery fire that killed Lieutenant-Colonel Johnny Johnson and Major Bampfylde (commander of company D) and Brigadier Lord Lovat (1st Special Service Brigade commander), Brigadier Hugh Kindersley (commander of the 6th Airlanding Brigade) and Colonel Reggie Parker (Brigadier Hugh Kindersley’s deputy).

At 10:45 pm, the handful of English soldiers took possession of Breville. In order to prevent any German counter-attack, the Allies set up an artillery barrage which unfortunately affects some positions occupied by the English. Throughout the night, Bréville’s position was strengthened: the tanks of the 13th / 18th Royal Hussars settled at 2 am, followed by the 22nd Independent Parachute Company and the 1st Battalion Royal Ulster Rifles (6th Airlanding Brigade). On June 13, 1944, the municipality was definitely in the hands of the Allies, but the losses were terrifying: only 32 paratroopers of the 12th Para Battalion were still able to fight: nearly 130 were killed or injured. Company D of the Devonshire Regiment lost 36 soldiers. The Germans of the 3rd Battalion of the Grenadier-Regiment 858 recorded the loss of 418 of their men out of the 564 engaged.

The Germans did not succeed in dislodging the Allies from the heights of Bréville-les-Monts during the following days. The castle of Saint-Côme is particularly occupied in August by the Dutch soldiers of the royal brigade “Princess Irene”. 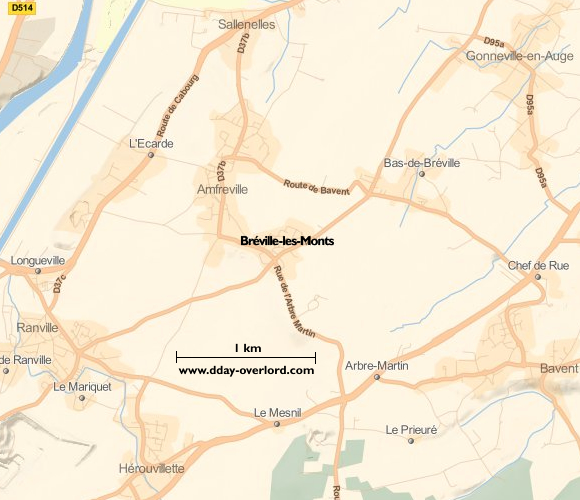