In the aftermath of the Normandy landing, the Allied forces engaged in Calvados did not achieve the original objectives. General Montgomery decided to restart the action on June 7, 1944 in order to seize the city of Caen: it was the launch of Operation Perch.

On 8 June 1944, the SS-Aufklärungsabteilung 12 and the 3rd Battalion of the SS Panzergrenadier Regiment 26 of the 12th SS Panzer-Division Hitlerjugend were ordered to settle in Brouay with a view to preparing a new offensive towards the coast .

The SS-Aufklärungsabteilung 12 and the 3rd battalion of the SS-Pz.-Gren.Rgt 26 reached the outskirts of Brouay around noon. Of the rest of their unity, amidst the scattered bodies of their comrades killed in battle. From Brouay, the Germans hired Allied armored tanks, which headed south to Audrieu. English tanks belonging to the 24th Lancers (commanded by the 8th Armored Brigade, 50th Infantry Division) reconnoiter midday in the direction of Brouay but retreated when the 3rd Battalion SS-Pz.-Gren.Rgt 26 engages them.

From 8 to 11 June 1944, the front remained relatively stable in the sector of Brouay: the two camps reorganized while engaging a permanent artillery duel.

On June 11, 1944, the 69th Infantry Brigade (commanded by Brigadier Y. Carson Knox) ​​of the 50th Infantry Division went on the attack and the 6th Battalion Green Howards Regiment, progressing from Audrieu to Brouay, Is taken under the fire of 3 / SS-Pz.-Gren.Rgt 26 near the railway. At dusk, the 6th Battalion Green Howards Regiment moved north of Brouay. Installed defensively on the depth, the Germans managed to repel this attack but lost 67 men in total (27 killed, 30 wounded, 10 missing).

As of June 15, the Germans began to withdraw their units located in the sector of Brouay. On the night of the 15th to the 16th of June, they recovered to the south at the level of the departmental 9 between Saint-Manvieu-Norrey and Fontenay-le-Pesnel. The Allies realized the situation and decided to launch an attack at the same time: the 49th British Infantry Division was in charge of seizing the commune of Cristot, south of Brouay. From 15 June to 23:00 until 16:00 at 04:00, the Allies carry out a continuous artillery fire in order to prevent their opponent from sleeping. A few hours before the beginning of the offensive planned for noon, the warships bombard the land between Brouay and Cristot; A quarter of an hour before the assault, they are fighter-bombers targeting the Germans still in the area.

In the early afternoon, the 11th Battalion Royal Scots Fusiliers (belonging to the 147th Infantry Brigade of the 11th Armored Division) took over Brouay.

Today, 375 British soldiers and 2 Canadian soldiers are buried in the Brouay military cemetery. 7 of them could not be identified (1 from the Royal Air Force and 6 from the British Army). 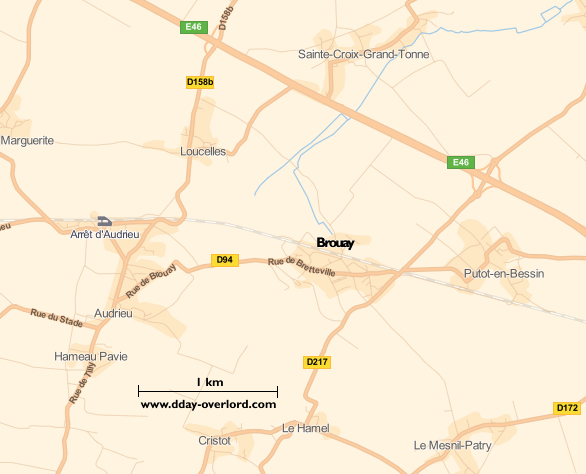