In the spring of 1944, the hamlet of Brucheville is held by elements of the Grenadier-Regiment 1058, 91. Infantry Division. It is also located north of the area of ​​responsibility of MG-Battalion 17, which is positioned there as of May 12, 1944. The outskirts of Brucheville are located near a key point of the terrain: this position controls one of the outlets (called “Exit 1” by the Allies) and is to be taken by assault by the 3rd Battalion of the 501st Parachute Infantry Regiment (101st Airborne Division).

On June 6, 1944, the parachuting of the 501st PIR is particularly laborious, especially for the 3rd battalion which is dropped over miles of radius. Two sticks land near the hamlet. The area is under control on the morning of D-Day, but the Germans in the south launch a counter-attack in the early afternoon directed from Carentan to Brucheville: the Americans stand firm, their opponents are stopped one kilometer south West of the hamlet, notably thanks to the intervention of the allied warships.

Nearly a month later, the Cotentin is secure and the American troops pierced the front in the direction of Brittany. As of July 6, 1944, the 843rd Engineer Aviation Battalion (EAB) is undertaking the construction of an airfield for the benefit of the US Air Force: this airfield, located southwest of Brucheville, is named “ALG A-16 “. However, the too loose nature of the terrain caused serious downturns and the aerodrome was declared operational only on 2 August 1944, more than 15 days after the date originally planned. Two tracks were built, including the 36th Fighter Group (22nd Fighter Squadron, 23rd Fighter Squadron, 53rd Fighter Squadron) on P-47 Thunderbolt and a 10th Photographic Reconnaissance Group detachment on F-5 Lightning. The operational period of ALG A-16 ends on 5 September 1944. 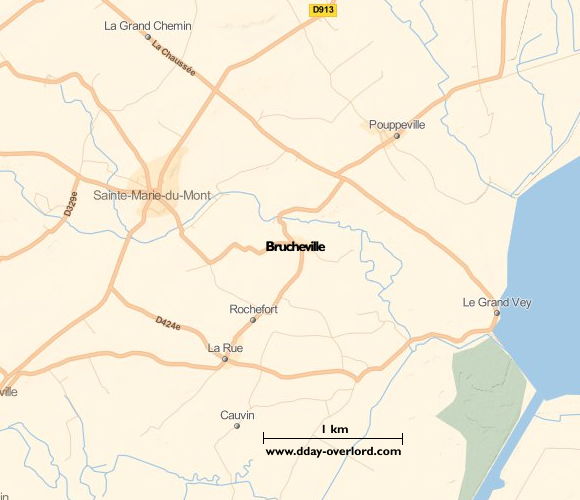