On June 6, 1944, the commune of Cagny in Calvados was occupied by elements belonging to the second battalion of Panzergrenadier-Regiment 125 (21 Panzer Division) commanded by the Hauptmann Kuron. These units are reinforced by 88 mm barrels of the Luftwaffen-Artillerie-Regiment 16 (L) belonging to the 16. Feld-Division (L), the Panzerjäger-Abteilung 1039 and the Panzerjäger Abteilung 1053. These elements are Placed under the responsibility of Major von Luck, who commanded the Panzergrenadier-Regiment 125: the Kampfgruppe (battle group) von Luck.

On July 18, the Allies launched Operation Goodwood, which aims to capture Caen. The offensive began with a massive bombardment that destroyed the vast majority of German positions. The commune of Cagny is located in the sector coded “M” by the allied aviation. The air attack, one of the most important of the Western European fights, destroyed many German positions and disrupted the defense line: 650 tons of bombs were dropped on the “M” sector. Only a few isolated units do not suffer damage. Major von Luck, who returned from Paris after being hospitalized three days, witnessed the air raid and immediately sought to take stock of the elements that were still in a condition to fight. He discovers with surprise that a battery of four 88 mm anti-aircraft guns, an 88 mm Pak 43 anti-tank gun and a Panther tank have not been touched. He immediately prepares them for battle.

Meanwhile, the 29th Armored Brigade of the 11th British Armored Division began its advance and reached the outskirts of Cagny around 9 am. Von Luck observes the tanks of the 3rd Royal Tank Regiment followed by those of the 2nd Fife and Forfar Yeomanry and forbids its elements to open the fire: it lets pass several platoons which enter the German device and the trap closes little by little. He then ordered the captain of the anti-aircraft battery to fire, but he refused, claiming that his mission was limited to anti-aircraft, and that he should in no way attack the terrestrial objectives: von Luck exits the pistol Of his case, points out the captain of the Luftwaffe and tells him that he has the choice between dying or winning a medal. The captain accepted and pointed the allied tanks by his formidable pieces of 88 mm. In less than five minutes, the British lose sixteen tanks and the allied assault is very slowly slowed down. The 23rd Hussars also engaged in the battle and suffered heavy losses.

In the morning, a Typhoon fighter from the Royal Canadian Air Force on a ground attack mission on a German mortar position at Mesnil-Frémentel exploded in flight and fell 1,500 meters northwest of Cagny. His pilot was Canadian Flying Officer John Kalen (439 Squadron, 143 Wing, No. 83 Group, RAF 2nd Tactical Air Force). Around 10:15, the second battalion of the 2nd Battalion Irish Guards of the Guards Armored Division is 2,000 meters from Cagny when four of its Sherman tanks are destroyed by the 88 mm guns. The entire regiment was stationed until 4 pm, and then he was ordered to bypass the village by overflowing to Emiéville, but he also recorded direct blows by the 88 mm guns. The fighting fades with the fall of the day. The plain is covered with dozens of smoldering wrecks, and the smoke masks the horizon. The engagement of the Luftwaffe artillerymen, little trained in the identification of ground targets, is certainly the cause of fratricidal fire on two Tiger tanks of the Schwere Panzer-Abteilung 503.

On the evening of 18 July, the 29th Armored Brigade lost 126 tanks. On the night of 18-19 July, the British revised their targets downwards and set limited targets. The 2nd Battalion Irish Guards managed to capture Cagny during the day and the Germans reorganized along a line linking Frénouville and Emiéville. 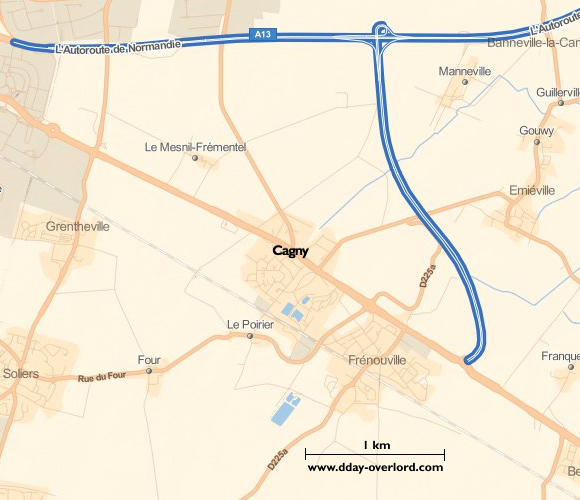