On June 6, 1944, the village of Amblie in Calvados was occupied by the second battalion of the Grenadier-Regiment 736 of the 716th Infantry Division. In particular, the Germans installed the command post of the Schwere-Artillerie-Abteilung 989, which is equipped with four 122 mm sFH 396 (r) guns.

After disembarking at Graye-sur-Mer, Company B of the 1st Battalion Canadian Scottish Regiment (7th Brigade, 3rd Canadian Infantry Division) progressed by keeping the Seulles River in handrail, West of Reviers and approaches Amblie by the north-east.

The Canadians did not encounter resistance in this locality, their opponents of the second battalion of Grenadier-Regiment 736 having withdrawn further south. They seize it and continue south towards Le Fresne-Camilly.

Beginning June 30, 1944, the Royal Engineers 25th Airfield Construction Group began the installation of the ALG B-14 airfield. This is a RRS (Rearming and Refueling Strip) generally used for ammunition and fuel refueling of allied squadrons. But this track is mainly used for the evacuation of wounded and the transport of personnel until the end of the war. It is the only English track in Calvados dedicated to the transport of personalities. 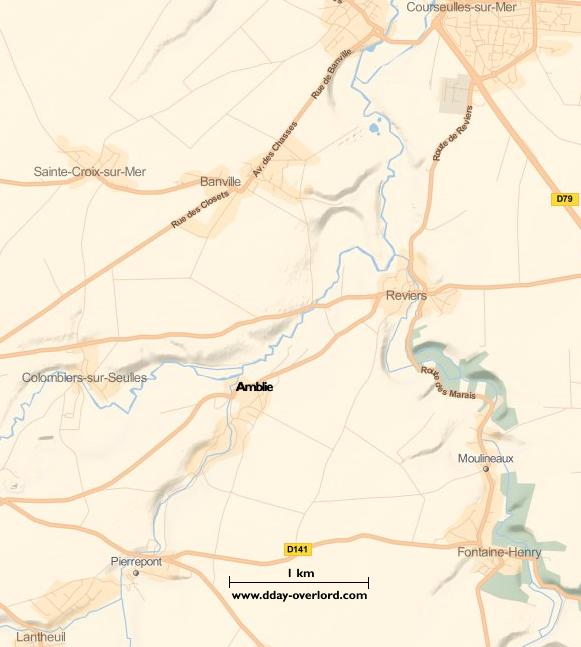