Cauquigny in 1944 – Manche – Battle of Normandy

The hamlet of Cauquigny is administratively part of the municipality of Amfreville and is placed in the spring of 1944 under the responsibility of Grenadier-Regiment 1058 (91. Infanterie Division). It lies at the northern end of the passage on the Merderet River and across the flooded land of the area. This road, which is 500 meters long, becomes a priority objective for the Allies during the preparation phase of Operation Overlord: its control depends on maintaining the bridgehead in the Cotentin which is surrounded by the Douve in the south and the Merderet to the west.

Cauquigny is one of the objectives of the second battalion of the 507th Parachute Infantry Regiment (PIR) commanded by Lieutenant-Colonel Charles J. Timmes, who is responsible for securing the northwest approaches of the bridge from La Fière to the village of Gourbesville . But in the early hours of June 6, 1944, the parachutes of the 507th PIR were the most imprecise of all the American airborne troops: many paratroopers landed in the marshes on both sides of the Merderet river and died under the Weight of their equipment. Lieutenant-Colonel Timmes only succeeds in gathering about thirty soldiers once on the ground; After taking the direction of the causeway of La Fiere then of Amfreville, it turns back and settles in defensive position less than one kilometer northwest of Cauquigny. Without radio, he had to re-establish contact with his leaders and then decided to send a patrol of 17 paratroopers to Lieutenant Lewis Levy (company D, 507th PIR) in the direction of the bridge of La Fière.

In Captain Floyd B. Schwarzwalder, unit commander of company 507th PIR, took a position in the hamlet and prohibited the advance on the road towards the west with paratroopers of different units. As he progressed, Lieutenant Levy met another platoon commander of Company D, Second Lieutenant Joseph Kormylo, accompanied by 20 paratroopers: a team armed with a machine gun was directed north to reinforce the position of Lieutenant-Colonel Timmes while the other elements reinforce the patrol of Levy which continues in direction of Cauquigny. Arriving at the hamlet, Levy reports the situation to Captain Schwarzwalder. Its men reinforce the position because the Germans are increasingly aggressive in the area and the fire of small arms multiply. Capt. Schwarzwalder decides to reorganize his device to the north in order to secure the position of Timmes, which obliges him to leave only 7 men at Cauquigny under the command of Lieutenant Levy: the latter are installed in Fortune spaced about fifteen meters from each other facing the roadway.

At around 4 pm, the Germans attacked the causeway of La Fiere by crossing Cauquigny. They are reinforced by elements of the Grenadier-Regiment 1057 and by three modified Renault tanks belonging to the Panzer-Ersatz-Abteilung 100. The paratroopers see the tanks and the infantry progress in their direction and engage the combat at very short range, using Including Gammon grenades against armored vehicles (these grenades are thrown by soldier Orlin Stewart). One of the tanks opens fire on the small church which is partially destroyed, raining a large amount of debris on the soldiers who defend the area. Meanwhile, paratroopers of company B of the 508th PIR under the command of Captain Royal R. Taylor installed south of Cauquigny take advantage of the formidable resistance of the men of Levy to retreat towards the south in order to cross the Merderet and join the shore East. But they have to cross a vast open swamp and their losses are numerous: many of them are injured and die a few moments later, unable to be transported or to reach a protected position.

In the immediate vicinity of Cauquigny, the adversary arrived in such numbers that the Americans could not hold out any longer: Levy ordered the withdrawal northwards towards the position of Lieutenant-Colonel Timmes, the Germans seized Cauquigny for a few moments later.

On June 7, the hamlet was exposed to American artillery throughout the day. The Germans used the houses to observe and correct shots in the direction of the bridge of La Fiere. Meanwhile, General Gavin (second in command of the 82nd Airborne Division) at La Fière is preparing a new offensive to secure the causeway.

On June 8 at dawn, the airborne soldiers of the 1st Battalion of the 325th Glider Infantry Regiment (GIR) commanded by Major Teddy H. Sanford approach Cauquigny from the north to secure the causeway west of the La Fière bridge. But they are quickly set about 1,000 meters north of the hamlet and stop the offensive. General Gavin then decided to renew the assault the next day with another battalion.

On June 9, 1944, at 6 am, the road launch launched from La Fière was launched by company C of the 325th GIR commanded by Captain Dave E. Stokley. The losses are numerous and Captain Stokley is injured. He was replaced by Captain Wayne W. Pierce who managed to reach Cauquigny after hard fighting during which soldier Charles N. DeGlopper carried out a heroic action to cover his comrades at the peril of his life The 3rd battalion of the 325th GIR (armed by Soldiers belonging to the 2nd battalion of the 401st GIR) renews the offensive after a fifteen-minute artillery barrage between 10.30 am and 10.45 am. Progressively and in pain, the sections advance towards the west under extremely fierce fire . Company E commanded by Major Charles Murphy, supported by 507th PIR paratroopers stationed on the east bank of the Merderet and supported by Captain James M. Harney’s F Company, storms the ruins of Cauquigny despite heavy losses and Obtains the surrender of several Germans. The Americans continue to the hamlet of Motey while several paratroopers of the 507th PIR commanded by Captain Robert D. Rae reinforces the front line. At the beginning of the evening, the latter retreats on order at Cauquigny to spend the night as a reserve unit.

On June 10, at 5 am, the 357th Infantry Regiment commanded by Colonel Philip H. Ginder and belonging to the 90th Infantry Division crossed the causeway and reinforced the troops in the Motey area, thereby removing the threat of losing Once again the hamlet of Cauquigny. 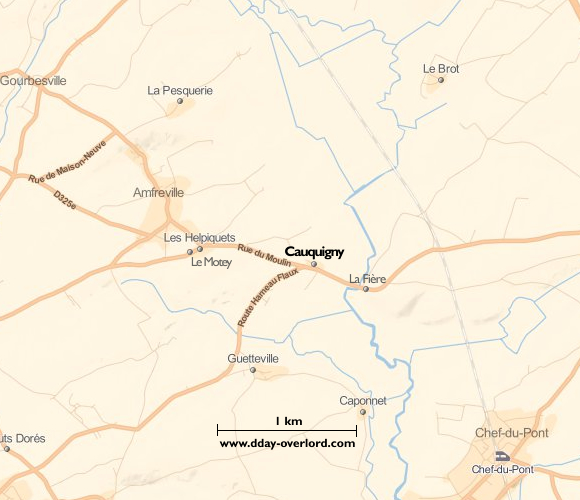