The village of Cerisy-la-Salle is located on a terrain that dominates the surroundings which gives it a special tactical importance. In particular, it allows to have views on the axes that lead to Coutances towards the west. The municipality is confronted with the fighting of the liberation from the night of June 6 to 7, 1944 when a Lancaster bomber piloted by the Pilot-Officer Frederick James belonging to the 460 Squadron (No 1 Group, Bomber Command) and touched by the German antiaircraft defense And crashes on the grounds of Cerisy-la-Salle. 7 crew members (6 English and 1 Australian) are killed during the crash.

On 26 July 1944, on the second day of the ground attack on Operation Cobra aimed at breaching the German front line south of Cotentin, this ground movement became one of the objectives of Combat Command A belonging to the 3rd Armored Division. The progress is slowed by the difficulties of circulation on a very compartmentalized ground due to the very nature of the Norman hedgerow of thick and numerous hedges. The few practicable routes are obstructed by numerous obstacles beaten by the fires and the Americans lose many men and vehicles during the reconnaissances. Nevertheless, their ability to apply fire support within a very short period of time allows them to continue the progression. On the night of July 27-28, the 8th and 12th infantry regiments of the 4th Infantry Division and the Combat Command A (CCA) were only 5 kilometers from Cerisy-la-Salle and had to defend their positions To elements belonging to multiple units, in particular to the SS Panzer-Division “Götz von Berlichingen”.

The constant pressure exerted on the German forces prevents any effective reorganization of the adversary who is obliged to withdraw. On 28 July, the CCA (commanded by Brigadier General James Taylor) resumed the advance and reached the immediate vicinity of Cerisy-la-Salle, which was well defended by the opponent. Despite the intervention of the allied aviation which supports the engagements of the land forces, the SS holds good. But on the night of 28-29 July, the Germans left their positions and moved southwards under cover of darkness, supported by their artillery and the Luftwaffe, which lost a Junker 88 aircraft on a mission over the area. When the CCA resumed the offensive on the morning of July 29, it took Cerisy-la-Salle without any difficulty. 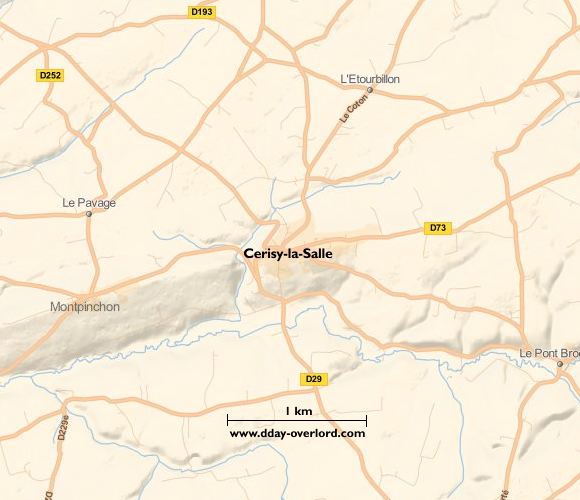