The village of Chef-du-Pont, occupied in the spring of 1944 by the German soldiers of the Grenadier-Regiment 1058 (91. Infanterie Division), is in the immediate vicinity of a crossing point on the Merderet river. During the preparatory phase of Operation Overlord, the latter became a priority objective of the Allies: its control depended on maintaining the bridgehead in the Cotentin which is surrounded by the Douve in the south and the Merderet in the south- Where is.

The capture of Chef-du-Pont is entrusted to the 1st Battalion of the 505th Parachute Infantry Regiment (82nd Airborne Division) commanded by Major Frederick C. A. Kellam. Although the 505th PIR parachutes were the most accurate of all the allied drops on the night of June 5-6, Kellam failed to muster enough soldiers to divide his forces into two groups as agreed Towards the bridge of La Fière, the other towards that of Chef-du-Pont). He made the decision to go to La Fière as a priority.

In the middle of the morning, General James Maurice Gavin, second in command of the 82nd Airborne Division, ordered Lieutenant-Colonel Arthur A. Maloney commanding the 3rd Battalion of the 507th Parachute Infantry Regiment to recognize the bank of the Merderet in the direction of Chef- Du-Pont in search of another crossing point. To this end, he is accompanied by 75 paratroopers from his unit. Later, General Gavin was informed that the approaches to the bridge at Chef-du-Pont were not forbidden: he then decided to seize it and ordered Lieutenant-Colonel Edwin J. Ostberg, commander of the 1st battalion of the 507th PIR, to complete this mission with a hundred paratroopers (from both the 507th PIR and the 508th PIR). Around 10 o’clock, Ostberg and his men reached the station in the center of the village without encumbrance. A battle group is responsible for securing the northern part of Chef-du-Pont, which he does without incidents. The other elements follow Lieutenant-Colonel Ostberg through the village towards the bridge; The Germans opened fire from several buildings, touching four parachutists and forcing others to stop. During the next two hours, Ostberg secures Chef-du-Pont and the Germans retreated towards the bridge.

The paratroopers then run at full speed towards this structure to prevent their opponents from reorganizing. But when they reached the bridge, an officer was killed and Lieutenant-Colonel Ostberg was slightly wounded. The Germans were entrenched on both sides of the bridge, installed in battle stations. A few minutes later, the 75 men of Lieutenant-Colonel Maloney arrived in reinforcement. The Americans manage to secure the east bank of the Merderet but they fail to hold the position, beaten by the fires of the opponent. Especially since around 5 pm on D-Day, the Germans counter-attack in a massive way north, in La Fière: General Gavin recalls Lieutenant-Colonel Maloney as a reinforcement, leaving only one section to hold The bridge of Chef-du-Pont. The 34 paratroopers who remain are under the orders of Captain Roy E. Creek, unit commander of company E of 2 / 507th PIR. These few paratroopers are quickly taken to task by the Germans along the western shore which are supported by a cannon causing additional losses in the American ranks and reducing the section of Captain Creek to only 20 able-bodied soldiers. In addition, some fifty Germans are still in Chef-du-Pont and start the fight. Creek urgently requests reinforcements; By a miracle, a Douglas C-47 appears in the sky, parachuting weapons (especially a 60 mm mortar) and ammunition near the positions held by the Americans. 30 minutes later, an officer and a hundred soldiers came to reinforce Captain Creek. They were equipped with a 47 mm anti-tank gun which was immediately used to silence the German artillery piece on the west bank.

Paratroopers deliver a particularly intense combat at very short range. The Germans, reinforced by elements of the Grenadier-Regiment 1057, charged to seize the bridge but 5 of them were shot down at point-blank range. Little by little, the shots stopped in intensity, which allowed the Americans to reorganize: their opponents retired at nightfall. 25 paratroopers are injured and can not be transported. Towards midnight, advanced elements of Company K of the 8th Infantry Division from the Forges established liaison with the paratroopers, to their great relief. The Americans hold Chef-du-Pont but the Germans are not far away, they still hold Carquebut just 1,000 meters to the southeast.

All day of June 7, 1944, the Americans must defend the approaches of Chef-du-Pont. They are reinforced today by the 3rd Battalion of the 325th Glider Infantry Regiment (which is in fact formed by soldiers of the 2nd Battalion of the 401st Glider Infantry Regiment). The third battalion of the 508th PIR under the command of Lieutenant-Colonel Louis G. Mendez Jr. reorganized itself from June 8th and controlled the area. On 9 June, the Germans still controlled the west bank of the Merderet: the 90th Infantry Division, which was reinforcing the paratroopers, went on the offensive. The 1st Battalion of the 358th Infantry Regiment crossed the bridge in a westerly direction under enemy fire and engaged the Germans on the other side of the Merderet at 5.30 am, permanently removing the threat that had hitherto existed to the Chief of Staff -Bridge. 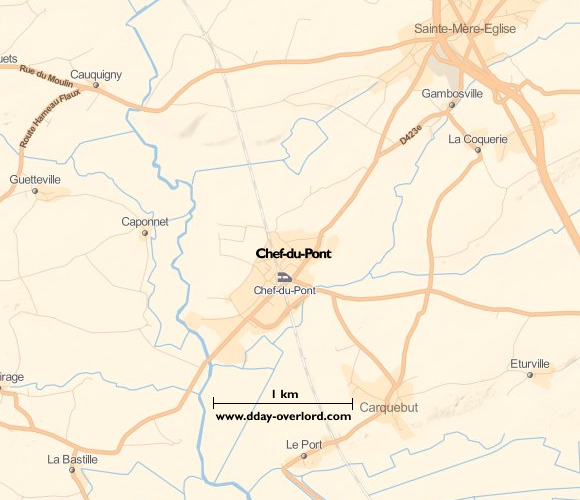