The SS Panzer-Grenadierregiment 26 belonging to the SS Panzer-Division Hitlerjugend moved to Cheux as from 8 June 1944, a municipality chosen by the Panzer-Lehr-Division commandment. The generalfeldmarschall Rommel visited the division on the same day at 19.05. The Cheux area has been an objective for the Allies since June 12th, as they plan to capture it today by an attack by the 2nd Canadian Armored Brigade, but without success.

It took almost two weeks for the Allies finally to reach that goal. On June 26, 1944, the British launched Operation Epsom, which was to pierce the front to the west of Caen and to control the bridges over the Odon. The Cheux area, at the heart of the offensive, is devoted to the 46th (Highland) Infantry Brigade (15th Infantry Division) and corresponds to the first phase of the offensive (coded “Gout”). At approximately 11:00 am, the Scottish regiment of the 2nd Glasgow Highlanders reached the northern edge of the village, which was defended by German infantrymen. The progression in Cheux was difficult and the Scots gave an exhausting fight on the streets, having to control the houses After the others under the fire of the enemy snipers. At 11:30 am, the 2nd Glasgow Highlanders reported that he had seized Cheux although enemy soldiers were still present in the village. The Germans then decided to set off their artillery and in particular on the commune, destroying part of the buildings.

In accordance with the plan originally planned, reconnaissance elements of the 11th Armored Division then advance towards Cheux, which they reached around 1250 hours, having been delayed by the successive minefields. In the village, they are still slowed down by the destruction caused by the bombing and they can not escape from Cheux until 14 hours. Half an hour later, the English were taken to task by twenty German tanks belonging to the 3rd Battalion of the Schwere SS-Panzer-Abteilung 101, to the S. Panzer-Grenadierregiment 25 and to the 21. Panzer-Division. As the 2nd Glasgow Highlanders began to advance south of Cheux, the 22nd Infantry Brigade of the 15th Infantry Division was hired as of 6 pm but failed to penetrate the line of defense. However, at the end of the day, the British succeeded in pushing the Germans back to National Road 175 (RN 175).

The following day, June 27th, the 15th Infantry Division was to be relieved on position by the 43rd (Wessex) Infantry Division. But the Scots retreated before the arrival of 43rd Wessex and the Germans of the SS Panzer-Grenadierregiment 26 took advantage of it to infiltrate and seize their positions: the fight between the two camps commits immediately and At 9.30 am six Panther tanks of the Panzer-Division intervened and managed to break the British line. They reached the first houses of Cheux and destroyed several anti-tank guns before retreating. The British secured the outskirts of the municipality throughout the morning, punctually undergoing German counter-attacks, which however remained limited in duration.

The next two days, the fighting moved away from Cheux, concentrating until 29 June at the height of the RN 175. 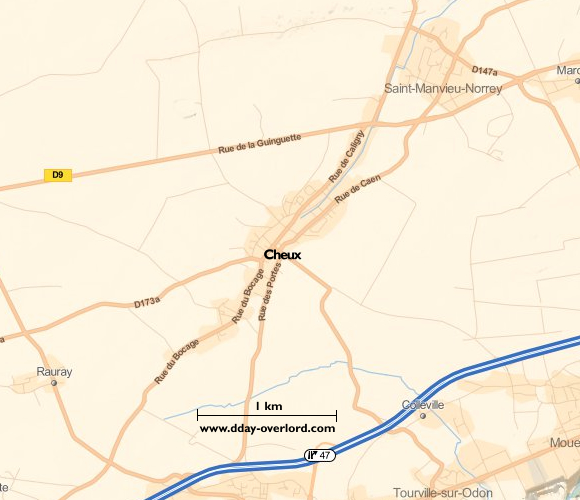