On July 11, 1944, the assault on the 2nd Infantry Division was to be preceded by a massive air raid: 192 P-47 fighter-bombers in 4 groups of 48 aircraft were in charge of destroying all enemy positions and carrying out missions in the Cloville sector and in the area of Hill 192. But the visibility is insufficient and the raid is canceled: a single ground attack mission is maintained for the benefit of the division. At 6 am, Company E of the 38th Infantry Regiment (IR) commenced an assault on the western side of Hill 192, followed by the other units of the regiment at 6:30 am with the support of tanks of the 741st Tank Battalion, a company of the 2nd Combat Engineer Battalion and a company of the 81st Chemical Mortar Battalion. During an hour of fighting, the Americans are opposed to the fierce resistance of German parachutists who do not retreat and the hamlet of Cloville is quickly nicknamed the “Kraut Corner”. Self-propelled guns and German tanks are engaged in the battle but are silenced by the 741st Tank Battalion. Finally, 15 paratroopers are taken prisoner and Company E resumes the advance south of Cloville.

The 1st battalion, under the command of Lieutenant-Colonel Frank T. Mildren, stormed at 6.20 am but was stopped on the starting line by German artillery and the direct shots that put six tanks out of action. Squadron A of the 741st Tank Battalion. On the right flank of the 38th Infantry Regiment, the 2nd Battalion progressed towards the 972 departmental road (D972) linking Saint-Lô to Bayeux and reached Hill 192. It reached D972 at 19 hours.

Meanwhile, in spite of the lack of armored support during the first part of the day, the infantrymen of the 1st battalion continued to advance towards Hill 192. The Germans defended the position with formidable combativity and the losses were high two sides. Company A progresses on the left flank, C Company on the right flank and Company B is in second position in the center. The Germans, unable to resist any longer, decided to retreat and abandoned Hill 192 to the Americans. They captured it at 1330 hours and continued to advance through a landscape ravaged by artillery fire. All the groves or hedges likely to camouflage Germans are systematically pounded by the assailants. The 38th IR is installed for the night within 200 meters of the D972, the final objective of the day. 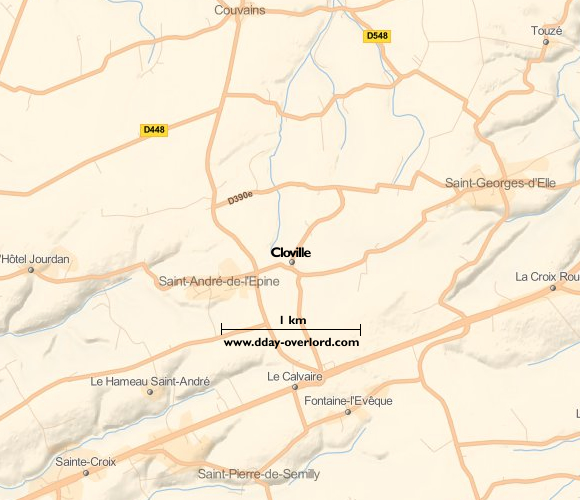