In the spring of 1944, the village of Crisbecq was occupied by elements of the 6th company of the Oberleutnant Geissler belonging to the Grenadier-Regiment 919 (709 Infantry Division). A coastal battery is also installed on the commune (also known as the “battery of Saint-Marcouf” or “Marcouf Marine Küsten Batterie” and “Seeziel Batterie Marcouf” in German). The garrison of Crisbecq’s battery is made up of 320 soldiers belonging to the Marine-Artillerie-Abteilung 260 and placed under the orders of the Oberleutnant Zur See  Walter Ohmsen.

The construction of the battery began in 1942 under the control of the Todt organization in charge of the installation of the installations of the Atlantic Wall. Originally composed of six 155 mm pieces which are then moved near Fontenay-sur-Mer, the Germans wish to install four casemates of the Regelbau R683 type, each housing a 210 mm gun (Skoda K39/40 from a Range of more than 30 kilometers), whose shots are controlled by a management position. In the spring of 1944, only two R683 casemates were completed and operational (even if the mobile shields to equip the guns were not yet in place) and three guns of only 210 mm are present: the allied bombardments which have accelerated since the month April of the same year prevent the continuity of the works. On June 5, 1944, a third casemate was still under construction, while work on the fourth had not even begun. On the night of June 5-6, 1944, Crisbecq was bombarded extensively by the Allied air force: 598 tons of bombs were dropped. Dozens of German soldiers are killed in this raid and all the anti-aircraft guns and one of the 210 mm pieces are put out of use.

In the early hours of D-Day, US paratroopers belonging to the 502nd Parachute Infantry Regiment of the 101st Airborne Division stormed the Crisbecq site. These soldiers, parachuted far beyond their zone of jump in the region of Saint-Martin-de-Varreville, tried everything for the whole but collide with the solid German defense: twenty of them are taken prisoners. The survivors travel all the way south to join their different rally points.

At 5 o’clock in the morning, the Oberleutnant Zur See Omhsen sees the allied armada and reports to its hierarchy. At 5:52, he was ordered to open fire, which he did three minutes later. The battery hires the destroyer USS Corry, the cruiser USS Tuscaloosa and the battleship USS Nevada. At the exact moment of disembarkation on Utah Beach at 6.33 am, shells reached the USS Corry directly below the surface of the keel and the American destroyer began to sink. At 8 am, the USS Nevada put out of use the gun closest to the coast and then, at 9 o’clock, the multiple shots of the three American warships neutralized the second piece of 210 mm. A shell fired by the USS Nevada makes ends and detonates inside the casemate, killing all its servants. Meanwhile, the last piece opens fire on Utah beach, causing heavy casualties in the ranks of the 4th Infantry Division.

At the beginning of the evening of June 7, 1944, while the duels between the battery and the allied armada continued all day, the 1st Battalion of the 22nd Infantry Regiment (4th Infantry Division) passed Saint-Marcouf and approached Crisbecq. The Germans fought back with a 75 mm that supported a German counter-offensive: the Americans retire for the night south of Saint-Marcouf. On 8 June at 10 am, supported by the tanks of Squadron C of the 899th Tank Destroyer Battalion, the 1st Battalion of the 22nd Infantry Regiment launched an assault in the direction of the village. From 1:30 pm to 1:50 pm, the Allies fire an artillery fire at the battery site before the battalion begins its attack. Company D is placed in support while companies A and B advance head-on, supported by company C. When they are within range, companies A and B are in turn in support and leave company C Mount the assault by crossing between the two units. The American infantry then engaged in a very short-range combat, destroying the German installations they took with the explosive. Omhsen then ordered his men to take cover in the casemates and asked the Azeville battery, located 1500 meters southwest, to open fire on his own position in order to repel the American attack. The left flank of the 1st battalion was severely attacked by a German counter-attack led by the men of Omsen and elements of the 6th company of the Oberleutnant Geissler: the Americans retreated again, 98 of theirs were made Prisoners by the Germans.

General Raymond O. Barton commanding the 4th Infantry Division decides to bypass the battery in order not to be delayed and to continue the progression towards the north of Cotentin. He did not want the Germans to have time to prepare new lines of defenses around Cherbourg. The 22nd Infantry Regiment began its advance at 4:30 pm.

Short of ammunition and medical equipment, Omsen was ordered to withdraw to the north. On the night of 11-12 June, he was able to cross the American lines through the darkness without being detected with 78 of his men. He leaves to the battery 21 of his wounded with a nurse and 126 American prisoners. On the morning of June 12, at 8.20 am, a patrol conducted by members of the 1st Battalion of the 39th Infantry Regiment (9th Infantry Division) near the Crisbecq battery revealed that the site was abandoned by the Germans. The entire commune of Crisbecq is then under American control.

During the weeks following the conquest of the Crisbecq battery, the American military engineer tested the resistance of the German casemates, using large quantities of explosives whose effects caused more damage than the bombing of the fighting. 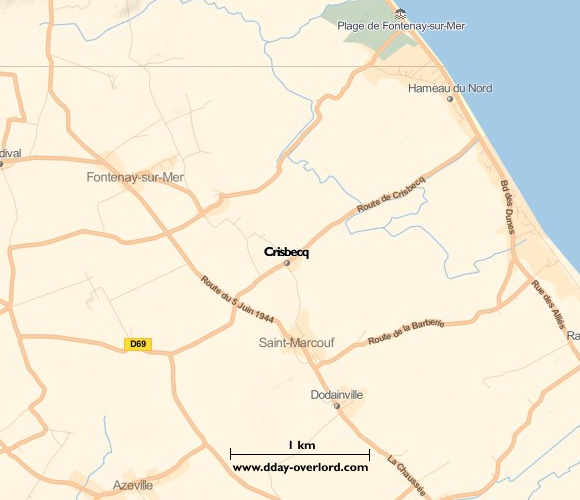