On 8 June 1944 in the evening, the 8th Armored Brigade of the 50th Infantry Division attempted to seize Cristot but without success.

On the morning of June 9, 1944, the front appeared to be stabilizing southwest of Bayeux along the railway line. Yet, on one side as well as the other, the offensives multiply to break the line of the adversary. The Germans aim at the sea, the British Villers-Bocage.

On June 11, at 2:30 pm, the 8th Armored Brigade and the 69th Infantry Brigade launched a new offensive in the direction of Cristot and Saint-Pierre. The British criss-cross Cristot by the west and infiltrate through a terrain unfavorable to the armored vehicles. The 6th Battalion Green Howards Regiment fell back at Audrieu’s height: the two unit commanders of “A” and “C” companies and the deputy officer of “B” company were killed during the offensive, the captain commanding “B” company is wounded. For its part, the 4th/7th Dragoons Guard lost 7 tanks.

As of 15 June, the Germans began to retreat from their units in the Cristot sector. On the night of the 15th to the 16th of June, they recovered to the south at the level of the departmental 9 between Saint-Manvieu-Norrey and Fontenay-le-Pesnel. The Allies realized the situation and decided to launch an attack at the same time: the 49th English infantry division was in charge of seizing the commune of Cristot. From 15 June to 23:00 until 16:00 at 04:00, the Allies carry out a continuous artillery fire in order to prevent their opponent from sleeping. A few hours before the beginning of the offensive planned for noon, the warships bombard the land between Brouay and Cristot; A quarter of an hour before the assault, they are fighter-bombers targeting the Germans still in the area.

Early in the afternoon, it was the 1/4th Battalion that captured Brouay without fighting. The King’s Own Yorkshire Light Infantry belonged to the 49th Infantry Division. The village is completely destroyed.

Starting July 20, 1944, the engineers of the Royal Engineers 13th Airfield Construction Group began construction work on the B-18 coded aerodrome south of Cristot. This advanced landing ground is operational from 25 July 1944. 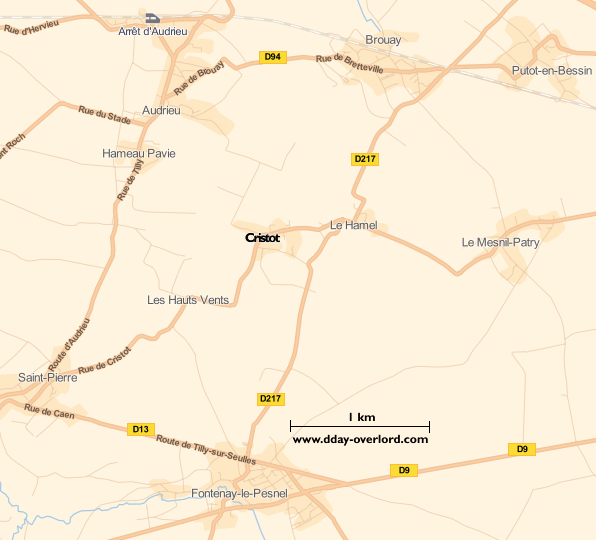