On 17 August 1944, more than two months after D-Day, the British launched Operation Paddle in the direction of the Seine. The Belgian and Luxembourg soldiers of the “Brigade Piron” (1st Belgian independent group attached to the 6th Airborne Division) are in the front line in the race towards the Seine.

On August 22, the progress of the Allies towards Deauville is made difficult because of the specificity of the terrain. This one is particularly compartmental and the important relief, dominated by Mount Canisy. The Piron brigade is divided into two elements: the 3rd company is progressing along the coastal road while the 1st and 2nd companies bypass the hill by the south.

The scout platoon of the 1st company is carrying out a reconnaissance mission to the outskirts of the Touques to find a crossing point of the river, guided by French resistance fighters. But they are opposed to the Germans of the 2nd battalion of the Grenadier-Regiment 731 belonging to the 711. Infantry-Division who immediately engage in combat. Belgian soldiers enter Deauville and take the town. Local resistance fighters are also helping to guide Allied military forces through the streets of their city. The soldiers then prepare to cross the Touques river to reach Trouville-sur-Mer, but the bridges were destroyed by the Germans.

Picture of Deauville in 1944

On the beach of Deauville after the fighting, German prisoners under guard cleared the beach obstacles and the networks of barbed wire. Photo: US National Archives. 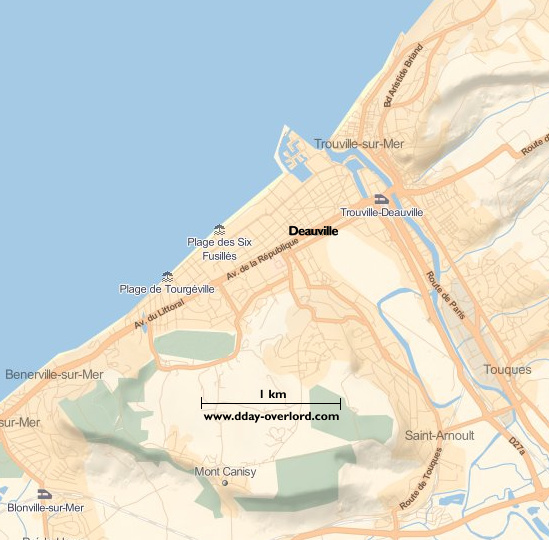