Ecoquenéauville in 1944 – Manche – Battle of Normandy

Ecoquenéauville was occupied in the spring of 1944 by Georgian soldiers serving under German uniform and belonging to Ost-Battalion 795 (709 Infantry Division). They are soldiers recruited from prison camps who volunteer to fight. Their command post is located in this commune.

In May 1944, during the planning phase of Operation Overlord by the Allies, Ecoquenéauville was initially the objective of the 12th Infantry Regiment of the 4th Infantry Division but plans were changed: it was the 8th Infantry Regiment commanded by Colonel James A. Van Fleet who is in charge of seizing it on D-Day.

On June 6, 1944, the Allies began the assault in Normandy and parachutes began in the Cotentin. Ecoquenéauville is located approximately one kilometer southwest of the “A” coded jump zone (planned for the 502nd Parachute Infantry Regiment and the 377th Parachute Field Artillery Battalion of the 101st Airborne Division) : Several parachute sticks of the 1st and 3rd battalions of the 502nd Parachute Infantry Regiment (PIR) are dropped in the immediate vicinity of the village.

When the landing on the beaches begins, on the dawn of D-Day, the Allies fall behind schedule and the 8th Infantry Regiment is unable to extricate itself entirely from the beach of Utah and then from the marshy area, Beginning at noon. Meanwhile, Ost-Battalion 795 retreats and settles between Turqueville to the east and Fauville to the west, although it is surrounded to the west by paratroopers of the 82nd Airborne Division and to the south By those of the 101st Airborne Division. Shortly after 9 o’clock in the morning, Major von der Heydte, commander of the Fallschirmjäger Regiment 6 (91. Infanterie Division), decided to counterattack and repel his enemies to the sea. He triggered a maneuver directed towards the beaches from positions held By Ost-Battalion 795, but his second battalion remains fixed by shots coming from Sainte-Mère-Eglise. The Americans did not succeed in penetrating the line of defense and continue their progress towards Sainte-Mère-Eglise. The 2nd Battalion of the 8th Infantry Regiment rounded the opposing defensive positions and approached Ecoquenéauville from the south.

The next morning, June 7, 1944, the Jeep carrying Lieutenant-Colonel Gorlan A. Bryant, Deputy Chief of Staff of the 4th Infantry Division, Sergeant John Svonchek and a pilot was captured by the Georgians, She approached Ecoquenéauville. The prisoners are transferred to Turqueville. At the end of the morning, the 2nd Battalion commanded by Lieutenant-Colonel Carlton O. MacNeely stormed the village: the Americans were caught in intense machine gun fire and artillery barrage. Nevertheless, they seized the village, the soldiers of Ost-Battalion 795 having decided to surrender, then they continued their progress towards the north. 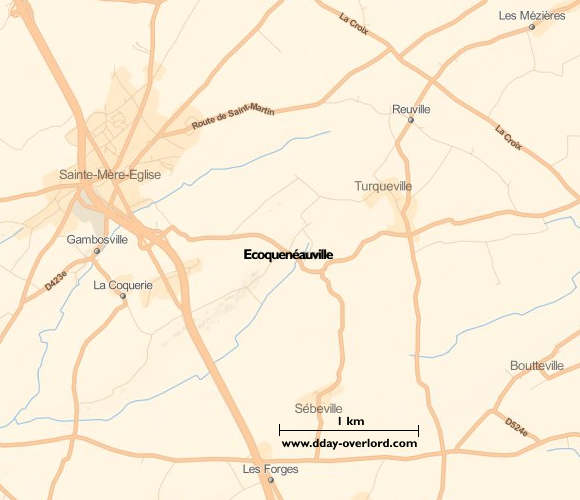