On June 6, 1944, the commune of Emiéville in Calvados was occupied by elements belonging to the second battalion of Panzergrenadier-Regiment 125 (21. Panzer-Division) commanded by the Hauptmann Kuron. These units were reinforced by the 1st Battalion of Panzer-Regiment 22 (Major Wilhelm von Gottberg). From July 14, 1944, Emiéville manor house hosts the command post of the Schwere Panzer-Abteilung 503 under the orders of Hauptmann Rolf Fromme. It is the first German armored unit equipped with Tiger II tanks to be engaged in Normandy. The 1st squadron settles to the south of the village and the 2nd squadron takes position in the woods to the northeast of Emiéville.

On July 18, the Allies launched Operation Goodwood, which aims to capture Caen. The offensive began with a massive bombardment that destroyed the vast majority of German positions. The commune of Emiéville is located in the area coded “H” by the allied aviation. The air attack is one of the most important of the fights in Western Europe. German tanks are severely hit by bombs that return some tanks from Panzer-Regiment 22. The tanks of the 2nd Battalion Irish Guards (5th Guards Armored Brigade) begin the offensive in the direction of Emiéville while the second battalion of Panzergrenadier -Regiment 25 is reorganized by forming a new line of defense at the height of this village. One of the most important tank fights of the Battle of Normandy is taking place in the area with the German commitment of Tiger I and Tiger II of the Schwere Panzer-Abteilung 503.

Lieutenant John Gorman, belonging to the 2nd squadron of the 2nd Battalion Irish Guards, progresses east of Cagny following a line of electric pylons with his squad of Sherman tanks. The armored crew named “Ballyragget” consists of a pilot (Baron), a co-pilot (Melville), a shooter (Albert Scholes) and a radio operator (Agnew). Gorman then reached the Cagny-Emiéville road from where he could see at a distance of about 200 meters four armored tanks stationed, the crews disembarked: a Tigre I tank, a Tiger II and two Panzer IV, belonging to the Schwere Panzer-Abteilung 503. This is the first time he sees the famous Tiger II, dubbed the Royal Tiger. After a quick discussion with his crew to decide what tactics to take, he ordered the assault to apply very short range fires and to take his opponents speed. His shooter-pointer Scholes fired an explosive shell on the Tiger II at a distance of about fifty meters in order to destroy his sighting systems, as the 75 mm piercing shells had no effect against the thick armor of the German tank. Two additional shells are fired but the Royal Tiger is not destroyed. Suddenly Scholes announces that the cannon is stopped, the Sherman can no longer open fire when he has just engaged the fight against a much more powerful tank. Gorman then orders his driver: “Driver, ram!”.

The crew of the Tiger II tank, understanding the maneuver and realizing it was too late to turn their turret in the direction of the Sherman, tried to reverse, either to strike it or to avoid it. The “Ballyragget” which entered at full speed manages to strike the left rear chassis of the German tank. The shock was so brutal that the equipment of the German tank immediately evacuated. Gorman’s tank is also damaged and no longer responds to all orders.

The other German tanks then take their aim on the Sherman of Lieutenant Gorman who then orders the evacuation of his tank. They are heading all the way to a cornfield. On his own initiative, one of Gorman’s subordinates, Sergeant Harbinson, opened fire on the three German tanks in order to divert their attention. The Tiger I adjusts his shot and touches Sergeant Harbinson’s Sherman, causing the instant death of the pilot, Lance-Corporal Watson, and radio operator, Davis. The other crew members are wounded: Walsh and Melville are able to extricate themselves from the Sherman and Walsh finds the strength to rescue his sergeant and transport him to the British lines. The Tiger II crew escaped, taking advantage of the distraction caused by the destruction of Sergeant Harbinson’s tank. The Lieutenant Once under cover, Gorman takes stock of his crew, but Agnew does not answer the call. He arrived only a few seconds later: the last one to leave the tank, he did not follow the right direction and headed for a group of soldiers lying in a ditch. He falls nose-to-nose with the crew of the German tank and immediately turns!

The lieutenant then decides to find a tank Sherman Firefly to destroy the enemy tanks whose position he now knows: he orders his men to remain in place while waiting for his return. Shortly after his departure in the direction of Cagny, the crew was taken under fire from artillery fire: shrapnel from the shells wounded Scholes and Melville. Gorman manages to retrieve a locked Firefly: it is in working order but Sergeant Workmann, tank commander, has been decapitated by an opposing fire, causing blood to spill throughout the crate, The sighting system. The lieutenant takes the command of the crew and progresses slowly towards the zone of the fighting, supported by the tank of Lieutenant Anthony Dorman. Stopping at an ideal firing position, his shooter points the Tiger I and opens the fire five times, without reaching it: the sighting system, covered with blood, is difficult to use. The sixth and seventh tests are the good ones, the German tank is neutralized. Gorman then orders him to aim at the Tiger II: touched, it ignites and the tank Sherman “Ballyragget” immediately catches fire out of sympathy. Both Panzer IVs leave the combat zone. Gorman and his men are caught under a new artillery fire: in turn wounded, he and his men retire to an advanced medical post. Sergeant Harbinson died on July 28 as a result of his injuries. For his acts of bravery, Lieutenant Gorman is decorated with the Military Cross.

But this isolated action does not allow the Irish to cross the German defense line: they are violently repulsed and fail to seize Emiéville.

The fighting continued the following day, 19 July. The Germans of the 21. Panzer-Division are reinforced on their left wing by the 1st Battalion of Panzergrenadier-Regiment 25, 12. Panzer-Division. On 20 July, they turned to the counteroffensive and put an end to Operation Goodwood, stopping the allied momentum in the sector. But the British did not give up the high-priced land and they managed to stop the counter-attack in their turn. Once again, the front stabilizes.

While the German armored divisions gradually tumble south of Emiéville, the area is then defended by the 346. Infanterie-Division of the Generalleutnant Erich Diestel. It was not until the launch of Operation Paddle on 17 August 1944 that the Allies finally seized the village of Emiéville. 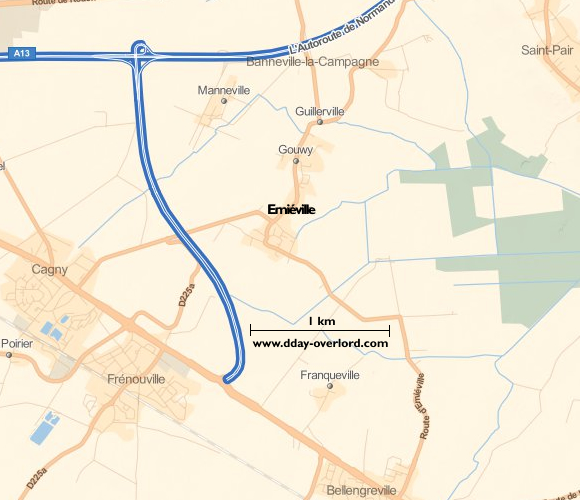