On the night of June 7-8, 1944, the 12th Infantry Regiment of the 4th Infantry Division was installed one kilometer south of Emondeville. Elements of Grenadier-Regiment 1058 (91. Infanterie-Division) are installed as a solid defense in the village.

On June 8, at 5:30 am, the naval artillery bombarded the town of Emondeville in preparation for the assault of the 1st and 3rd battalions of the 12th Infantry Regiment (commanded by Colonel Russell P. Reeder, Jr.) 6.30 am The results of the various companies are very uneven: Company L crosses the first German defense line, located about 700 meters south of Emondeville, and delivers difficult fighting in the village before progressing 500 meters to the north . Company K is fixed for 5 hours 30 on its starting line by indirect shots. Colonel Reeder hired the second battalion, which had been in reserve until then to re-establish the front line. He reached 300 meters to the north of the village, but the L company was obliged to withdraw to avoid being isolated in front of American device.

At midday, the Germans launched new counter-offensives to the south, missing several times to break through the American line and endangering the command post of Colonel Reeder south of Emondeville. The companion I is obliged to intervene to protect the staff and to push the adversary towards the north. On this one day, the 12th Infantry Regiment loses nearly 300 men (killed, wounded, missing or taken prisoner). The Germans, who also suffered heavy losses, retreated to a new line of defense at Joganville, abandoning Emondeville and La Basse-Emondeville to the Americans. 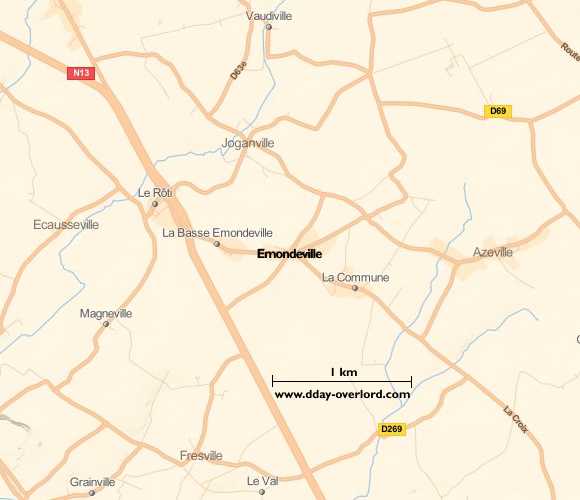